The Origins Of A Cardboard Addict: Wrestling With Acne

By the time 1997 hit, I was knee deep into the hobby and anything that looked like a collectible I was buying. Whether it was magazines, newspapers with big sports headlines and moments, cookie wrappers, Wheaties boxes, Cheez-It cans,you name it, I bought it. Sometimes I would leave the product sealed, other times I would pop it open.

Speaking of popping, also in 1997, I was 14 and had hit that age of every kids nightmare....ACNE. And I was hit super hard with it. Kids would stare at me like I was a creature from a horror flick. They were all over my face and some even on my back. Those things were so uncomfortable and painful and extremely embarrassing.

Girls avoided me like the plague as well. I sometimes felt I appeared to them as the Toxic Crusaders Toxic Avenger! Oh well, I will take being a super cool nerdy super hero with mutant powers. I mean, I am nerdy. I collect junk, read comics, watch cartoons, love Batman and collect trading cards.

I tried a few different acne brands, but none seemed to really work well. So back we had gone to Ames, yeah it was a hot spot back for my family back in the 90's, and I went searching for new acne medication.  When I saw a box of Stridex Pads on the shelf, I hadn't tried that one, I  picked up the box and immediately noticed the words "WWF cards included". Sold. They had me. I didn't care if it worked or not.

I didn't know much about WWF wrestling, but knew of some names because my friends were into it. It just didn't appeal to me and the only thing I knew it as was fake. I was also trying to figure out what Stridex and WWF had in common, which later on I found they sponsor some events for them. Still an odd combo to me.

Anyways, I cracked open the box when I got home and pulled the cards out. They were actually a lot cooler looking than I expected. I really liked the design and that's probably why I held onto them. I have tried to do some research on these to figure out more about them, but there isn't a lot of information out there. I can't remember if all of these came in one box or multiple ones. I also got mixed numbers on amounts of cards in the set but we will say it's between 6 to 9 cards. I would lean more towards the six and one would assume that these came in a five card pack since it's not often I misplace cards that are kept together. But, I do see some sites with at least two I don't have so who knows.

I did find out they appear to be pretty rare to find and values about $50. Not bad that I have held onto these all of these years and only paying about $3 for the Stridex to begin with.

Here were the cards in my pack. 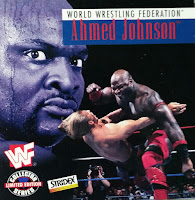 Shawn Michaels. This was one of the names I knew from my friend Brian who was a Michael's fan. 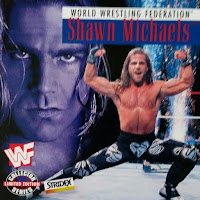 Stone Cold. Another name I knew. 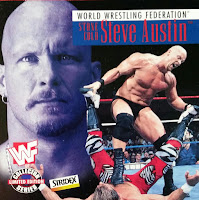 Undertaker who I didn't know at the time, but his face on the side I tried not to look at as a kid. 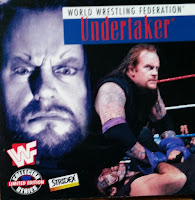 Here was the extra promo card that came along with it. 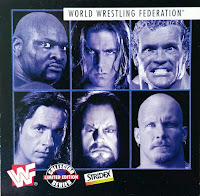 I did get to know most of these names in the early 2000's as I started watching some WWF with an ex-girlfriend's brother. The only appeal I saw to the show were the story lines. It was like watching an aggressive soap opera with men in tights and with language. Occasionally a nice looking girl as well. After the girl broke up with me, my relationship with WWF left as well. I wasn't too upset about losing either of those things however.

I did manage to hold onto these over the years though. Cardboard never leaves you.

As for the Stridex pads themselves, they seemed to work really well for a few years before I had to switch over to Noxema and another cream to treat my acne. It sadly lasted well into my 20's.
at October 17, 2018