Do any of you play this game for basketball, football or hockey? (Topps has a version for baseball that I haven't tried)

Its a great concept and something I rather enjoy. It combines 2 of my favorite things. Sport Cards and games. However, I still collect the cards like they are cards sometimes. If I get a good rookie card or a hard to find one those are the ones I collect. The Adrenalyn cards do include Sp's like the Silver Signature Brett Favre version which I own, these type of cards get put elsewhere. They are also hard to find. About 3 per a box if you were to buy a box of this product. Favre is one of the rarer finds.

As for the game, you play it like the real sport. It comes with a game board, rules, a binder to put them into and some packs of the cards. And each player, depending on how good they are, have a value number for their position (if the sport is football each player has a passing and running value for offense and defense) and you follow each sports rules. Its not very hard, but is a ton of fun and addictive if you have a sport fan in your family who you can start a rivalry with.

Here is a quick example of how to play the football version we have pictured:

As you see, If you throw to Calvin Johnson, you would take Tom Brady's pass number and add it to Calvin Johnsons. That gives you a total of....64. You then look at Brian Urlachers pass number and you subtract that from Calvin's number...64-49=15 yards is what you would gain. This is just a basic way to play. You could complicate things some and add on the boost numbers and so on. Its played like real football. You have 4 downs to get 10 yards. You have 4 quarters and each team gets a possession per quarter. Each Team gets 7 players per offense and defense. 2 on each side are reserves. You can also use them as the markers on the side to mark the quarter, down and the line of scrimmage and where the first down is. These are the breakdown of the 2010 game.
Just one more tip, I have found it more efficient if you are playing someone who doesn't know much about sports, if you shuffle the deck of cards before splitting it in half to make your player selection so that way you or they don't get all of the good players. 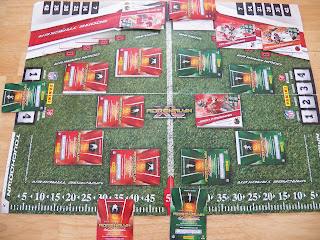