Recently I busted a box of 1995 Skybox Premium Football 1995. I did this for many reasons. One, I wanted the nostalgia. Two, I wanted to have a fun bust where I wasn't worried about value because that's the 90's way of collecting and I like it! Three, I liked the design of the overall product from base cards to inserts.
Back when I first bought some of the product in 1995 pack prices were about $2.99. I remember going into our local gas station (my second hobby shop option at that time) and picking up a few packs at a time counting down the seconds I got to open the beautiful product in the car. Flash-forward 19 years later,  I got this box for $18 and it came with 36 packs, 10 cards per pack and a whole lot of fun. That moment of running back to my car to bust the packs came back as well, except this time I opened the box that UPS came with and ran to my couch. I savored every minute of opening every pack. The only issue I had with this box was the cards sticking to one another in the packs. I guess it's something you have got to think about when buying older product and not something I even thought about when I bought it. Lesson learned.

As you notice by the title, I am breaking down this 90's Rip Party version of 1995 Skybox Premium into 3 sections. Yesterday I started out with the base cards, rookie cards and two of the subsets that you can find HERE. Today, I am moving onto my favorite subset of all-time called Mirror Image. Thirdly, I will finish off with some sweet looking inserts while giving my thoughts on each section along the way.
Today's part of the break is what I consider to be the best designed subset cards ever. They are very eye appealing and have a great checklist of players involved. But, enough of me rambling. I will let the pictures do the talking!
CAUTION: looking at this gallery below is mind blowing. I expect your brain to be laying on your keyboard or mobile device soon. Check it out: 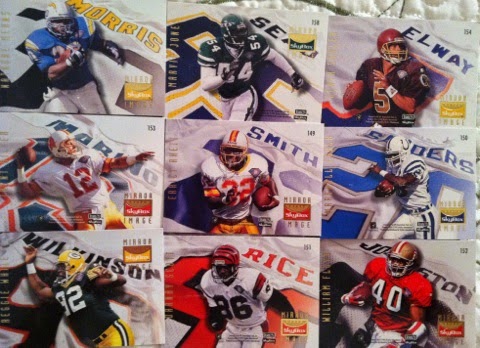 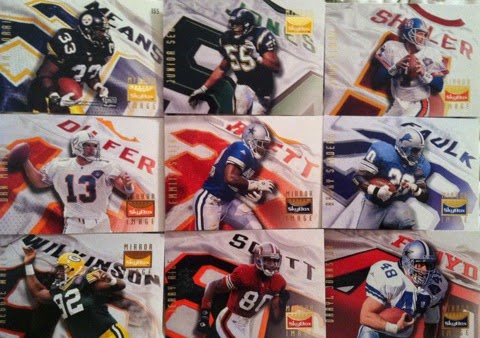 Obviously, my favorite of the group is this next one. Rodney Hampton was a Giants beast! 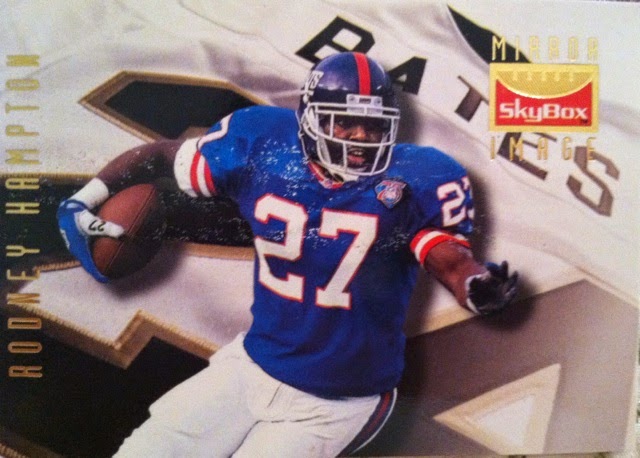 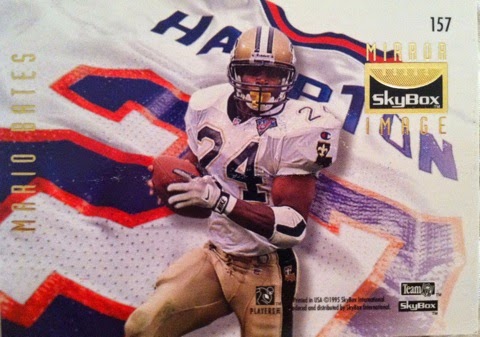 Boom! Splat! I warned you. Now please put your brain back into your head and refocus.

Skybox did a top notch job with design here. They took two players, one star with one "mirror image" of that star from the rookie class of 1994, one was on one side, one on the other. In the background behind the player was the opposite players jersey. It was very creative and looks great here but even more outstanding in hand.

Another part that makes these even more fun now is looking at the combinations they gave and seeing how much of an Mirror Image they actually were of that player. For example, John Elway/Heath Shuler. I think we know the answer to that one. Darnay Scott and Jerry Rice..well.... However, looking at all of them now, the closest combo you would have to say is Barry Sanders/Marshall Faulk. Good call by them on that one. Both unstoppable and Hall Of Famers.

Let me know your thoughts on this subset and whether you agree that it's the best designed one ever.
at April 05, 2014