When you start to learn the names of the other bloggers in the blogosphere, one common name I have come across is Matt. I know of at least 5 of us with that name that blog so sometimes you feel like you are talking to yourself or in the third person.

I am not sure if the name Matt means blogger, but it feels that way.

Even though the name is common and it may be confusing at times if you are talking to the right one, sometimes the name comes as an advantage. Recently Matt over at Summer of '74 posted a bunch of football cards up for grabs including some TTM with the players signing them for Matt. I can't imagine someone not named Matt would be as interested, but for me, they fit right in and it included a good group of guys.

This first card isn't a TTM or autograph, but it's a card I have wanted forever. The Pro Set Santa card for my favorite holiday. The other Santa card I am hoping to land at some point is the Sp Authentic autograph relic one in the late 90's. I have seen a few bloggers post it and it makes me jealous. I also wouldn't mind the other Pro Set ones of the 90's too. 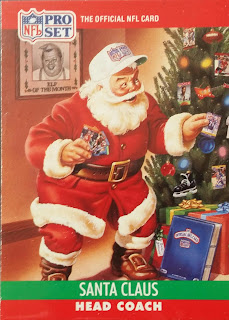 My first TTM snag was Tony Boselli. A dominating lineman that played anchor for the Jags. Normally I am not an oline kinda guy despite playing some guard and tackle in high school, but he was a 90's guy and HOF. 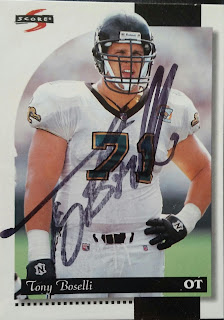 Speaking of HOFer, Adam clutch Vinatieri was a no brainer add. But, I will always think of him as a Patriot sadly. The team I hate the most. 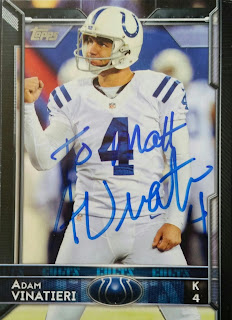 Charlie Ward was a 2-sport stud who ended up playing for my Knicks in the 90's. I wanted this one just because of that. I was a fan of his. 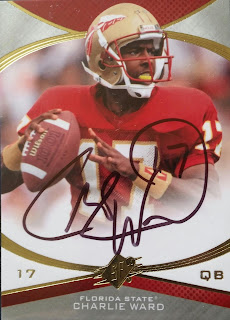 Aeneas was a shut down safety in the 90's. Probably the highest stud the Cardinals had up until they drafted Jake Plummer. 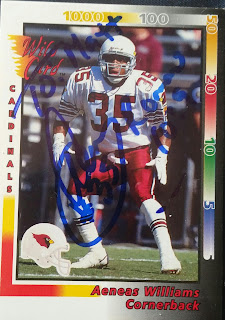 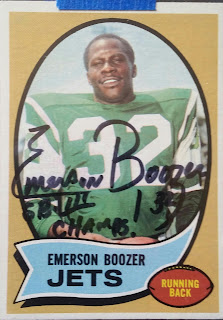 Same goes with this Dorsett. I miss Upper Deck in the football card game. 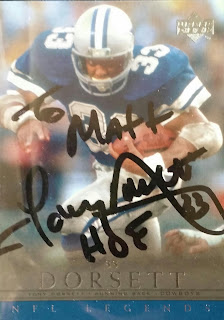 A big thanks goes out to Matt for the cards and no I am not thanking myself. Pretty happy to add them to my PC and I hoped you enjoyed your return as well.
at July 28, 2018