Never Too Early For Football

Every few months, I usually can expect a mail box with a box full of goodies in it from my friend Grady M who has been a Facebook follower, blog reader and Twitter friend for a long time now. I am not sure what drove him my way, but I am so lucky and fortunate to know him. Really nice guy.

In May, I got yet another box packed to the rim full of inserts, base card and PC specific cards. I really love digging through and sorting it all. I usually take my time when doing so enjoying every moment.

This was once again another hefty round full-o-goodness so it will take a few posts to cover it all.

Today, we stick to the football specifics.

Odell Beckham Jr. I really like the Illusions card. I didn't get that from my box break. 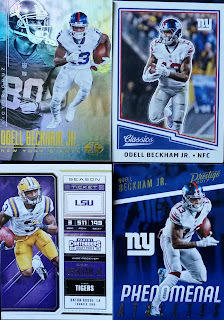 My first taste of 2018 Score Giants. Hopefully I can get more football cards this year unlike last year. But, we will see. 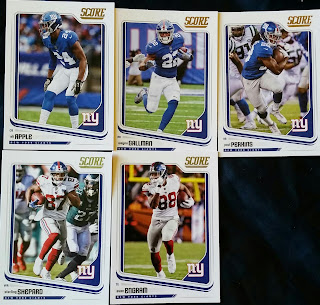 A couple of rookie cards from 2017. Travis Rudolph who had such an impressive preseason last year kind of dropped off when he had a chance to play. But, I think the kid is talented and hope he makes the cut this year. The other rookie here is Evan Engram. This guy should be pure heat this year as long as he fixes the drops he had last year. 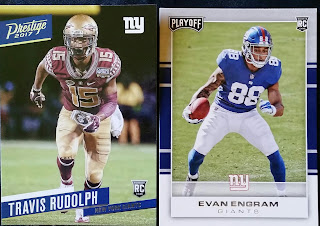 Ron Dayne who never really panned out for his high draft status. Was a great collegiate player however. And Landon Collins who more than panned out. One of the leagues best safeties. 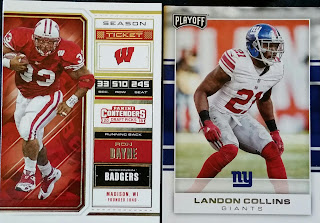 Will Tye Prestige parallel. Big weapon but way too many drops. He has since moved on in the Giants house cleaning And of course the Captain, Mr Eli! He was voted the most overhyped player going into 2018, but watch out this year, he will prove critics wrong. 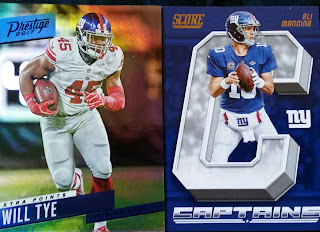 A start of a letterman run? Now I want the rest of these. Would be fun to display. Trading buddies, keep an eye out for these. 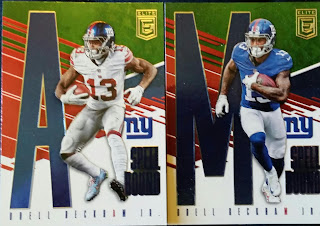 Kyle Carter was claimed off the Viking waivers to be one of the backup Tight Ends. I assume the Vikings former offensive coordinator now Giants head coach saw something in him . 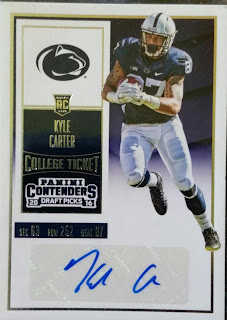