The Origins Of A Cardboard Addict:Running With The Best In 1997

There I was lined up in the backfield next to Andy, the short but accurate throwing QB who knew exactly what I wanted on the next play.

Our team of just us two trailed my BFF Brian's team by a touchdown. It was fourth down and long to go.

I think everyone knew the play call, but what it came down to was whether they could slow down the 5 foot 11 8th grader with hands of Jerry Rice from catching the pass.

We called the play simply, "over the shoulder". Andy had a weak arm but incredible accuracy, but with my height and speed there as no way they were going to stop me.

Brian lined up at corner to cover me while Aaron his teammate was supposed to keep his arms high to try and block the pass Andy was trying to throw. Aaron was much bigger and stronger than Andy.

Andy said hike and off went the play.

I started to go straight at Brian before making a sharp cut to the right, Andy rolled to his right and let a pass sail. The key to this play was me never turning back to make a play on the ball. If I turned back to try and catch the pass it would give the corner an advantage and they would know the ball was coming. This is what made this play so successful on my end. I literally was waiting for that sailing ball to land into my awaiting hands. And just like one of those slow-motion Hollywood sports movies it did and I burned Brian afterwards.

After scoring the game tying touchdown, I did my Mile High Salute like one of my favorite players at the time would after they scored, Terrell Davis. Everyone was expecting my usual touchdown celebration. In the end on recess that day, Andy and myself ended up winning after Andy picked Brian's pass for Aaron off and threw the game winning touchdown on a leaping catch by yours truly. It was a game for the ages.

Speaking of Terrell Davis and games for the ages, those words go hand to hand.

Terrell Davis was a 6th round draft pick of the Denver Broncos in the 1995 NFL Draft. He was the 6th RB on the depth chart for the Broncos and somehow impressed enough to make the team. He got better and better as time went on and earned himself the starting role and ran for 1,000+ yards his rookie year. Most by a low drafted player their rookie year. Davis got better year by year as well. He helped lead the Broncos to back to back Super Bowl wins including a 2,008 yard rushing season in 1998.

The guy was amazing to watch.

Then the injury bug hit to end his career after the second Super Bowl win. Davis tore his ACL in 1999, something I know all to much about from football, and after a couple more injury riddled seasons retired in 2002. I can only imagine the heights this guy could had reached had he stayed healthy. I think he could have easily chased some of Emmitt Smith and Barry Sanders records.

With my recent trade with @StephenJFurlong, I had one more card on the way that wasn't ready to be posted quite yet in that post. As you saw in our trad, I added some pretty sweet cards to my Terrell Davis PC including my first patch card. This time, I added a much needed pro autograph of him. I had a college phone card signed but that's not even close to this beauty... 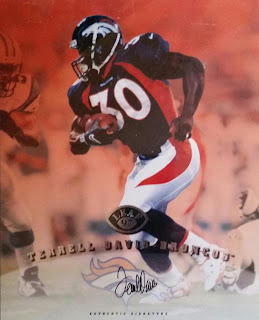 Beautiful color scheme and great TD picture. I do wished his autograph filled up the card more but I will take it and it's on card. Remember those days??

Me and TD have much in common when I think about it. We both hold records, mines on the playground but I will take it, we both tore our ACL's that ended our football career, and we both had the drive to prove others wrong who doubted us. Something I have dealt with my entire life.

A big thanks goes out to @StephenJFurlong for the autograph and bringing back these wonderful memories from my childhood. As for me and my recess football buddies, only Brian I keep in contact with anymore. I was actually just in his wedding as best man a few weeks ago.
Did I do the Mile High salute to celebrate his wedding, well, not in front of him at least.
at August 21, 2018