With recent non success in pulling a Yasiel Puig rookie card, by far this years hottest rookie sensation, I was hoping for another way to possess at least a card of his. Buying wasn't an option. Prices for his cards are through the roof.  And they could only get hotter if he helps carry the Dodgers to a World Series victory.  Not to mention, quite frankly, though he is talented, I don't want to invest too much into a guy that could bomb next year. So I find buying a pack or two now and then to try and pull him that way is the best.

However, a few days ago my latest issue of Sports Illustrated For Kids arrived and BOOM look who's card was found inside.... 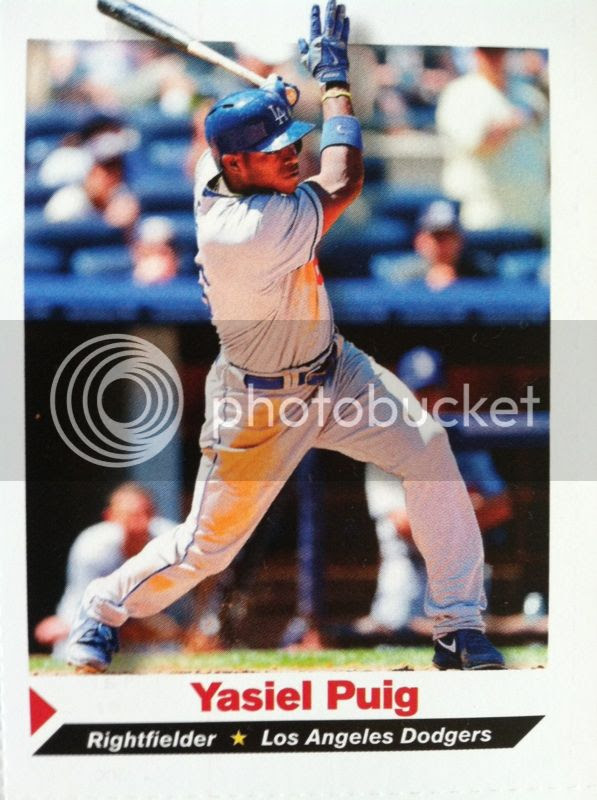 Now most probably wouldn't recognize this as a rookie or probably even as a card. But if you check out prices on these they are already going for over $10 as collectors try to add this guy to their collections anyway possible. So for now, it's my only Puig "Rookie" Card.

Ever since the Tiger Woods 1996 Sports Illustrated "Rookie" Card was discovered I believe it helped put these cards on the market and possibly making them not only Rookie Cards, but legitimate cards.

Let me know your thoughts on what you would call these "cards". Do you collect them?
at September 10, 2013