Alright, I have some explaining to do. Yes, this segment is called, Reminiscing 90's. Yes, this is a toy from 1988. Yes, I do know the difference between 90's and 80's. However, I am making a case for this toy and keeping the segment still 90's because I watched the show mostly in the 90s and it ran from 1986-1991. So in order to make sure I do this right, I am keeping the toys as their real years, but I am coming up with random year of either 1990 or 1991 for the posts. That way it's as close to realistic as I can get and keeping tradition going with the posts.

I think my timing on this upcoming Ghostbusters mania is good due to the new movie releasing this year. I still don't know how I feel about that movie yet as I am one for originals of any movie, but we will see.

Thanks for reading and enjoy!

FEATURED TOY:
It's simple, Janine is scared. So scared that she rotates to fight off the ghosts! This piece came in that big lot I bought off eBay. It was quite the lot for only $25. Today marks the final part to my Ghostbusters series even though I do have more to show. But, it's time to move on.

FEATURED CARDS:
DC Superheroes+Janine..well...yes. She was a superheroe to some answering that phone non-stop for the ghost calls. She also went out on a few ghost chase herself. So to me, she is a super hero.
These are 1991 DC COMICS COSMIC 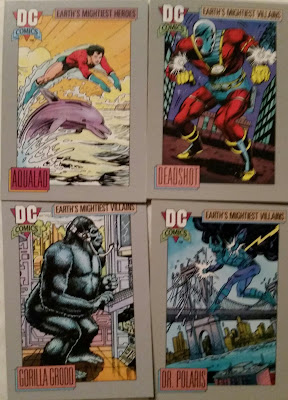 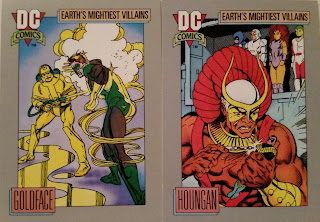 I have a whole box of these things that I throw in trades sometimes. So if you have ever traded with me, you may have found yourself a pack or two.
Well, that marks the end of the Ghostbusters series but there are more 90's fun to show off ahead. Your thoughts on the Ghostbusters finale are welcomed.
at June 25, 2016