I did something stupid recently.

I left a stack a stack of cards I was pulling from sleeves near a pile of dirty laundry (the cards were stacked on my desk but weeble-wobbling above the dirty laundry on the other side of my desk) and upon picking up the pile, some had fallen into it. I was pretty sure I had grabbed them all when I was sorting the clothes out until I had washed the load....

A 2016 Panini Prizm Jarvis Landry base card was left behind in the midst somehow. I don't like having a card destroyed but at least it was just a base card. Could have been a lot worse.

So if you are curious what happens to a Panini Prizm base card after going through the wash, well. here we go.

The sleeve it was in is and still is soaked. I can't seem to dry it and probably won't bother anymore at this point. 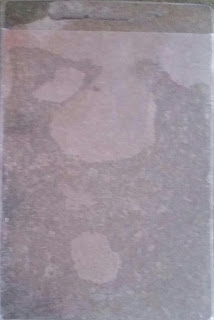 The card from the side view after pulling it out. It is bent but also has some wiggle.

The front looks no different but you can feel it. 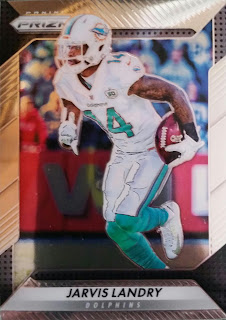 The back of the card shows that the middle wasn't wet yet. 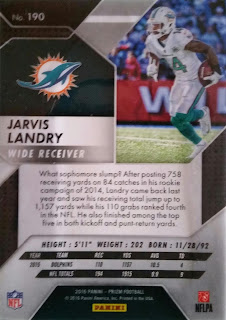 Here is a better angle of that when I put some light on it. 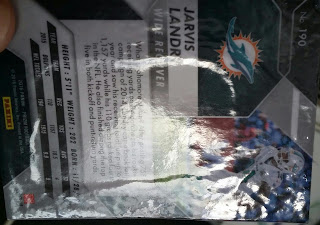 I have been trying to dry the card out for awhile now and it doesn't seem to be healing any better and pretty much looks the same as it did coming out of the wash. All I know is, next time I will make sure that I sort my laundry as well as I sort my cards.
at April 11, 2018