Today's post is brought to you by a treat that became a cereal, 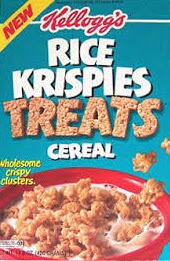 Back in the 90's, there was no better snack when I went to a friend's house than Rice Krispie treats. I could literally eat the whole pan at a time. But, I had to share obviously.

So when they made that special treat into a cereal...I had to try it and it was so stinkin' good.

The cereal tasted just like the treats and adding milk on it-sometimes I would just eat it out of the box- instead of beside it just helped it even more. It was an all in one snack breakfast cereal extravaganza with ever bite.

I was a little sad when the cereal disappeared off store shelves, but within the last 5 years or so the cereal was revived and can be found on shelves at Walmart. That's the only place I have been able to find it.

And even though I am 20 years older, I still enjoy myself a bowl...or two.

***********************************
Back in 1997, Bowman baseball put out International parallels in their product that fell one-per-pack. The only difference between these and the base cards is the background behind the player is a flag that tells what country the pictured player was born in. Simple but distinct parallel to search for. With so many cards in that base set chasing a set of them wouldn't be easy.

For this post I chose this Ricky Ledee because it was the first Bowman International I came across and because of the picture used on the card.

The picture looks like one you would take for your senior photo in high school or one you would use for a dating promotional. Either way, it makes you chuckle some and can even come up with a few captions for.

Here are a few of mine,

"Hey Girl!"
"Whatcha eatin there...wanna share..."
"That face you give when someones talking on and on and your not listening to any of it" 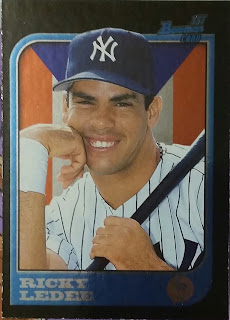 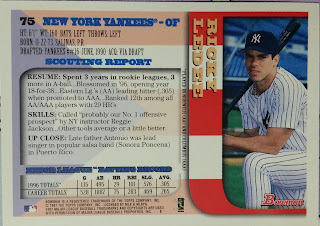