You ever forget about some products? Well I have.

Back in 2013 Topps released a 75th Anniversary product that celebrated their diamond anniversary and included a look at over 100 entertainment sets.  The base set included 100 cards including a base card I had wanted I forgot about.

Ghostbusters 2 had a card in the set and of course being a fan I wanted it at the time, but as time passed, I had forgotten about it. That's until a few days ago when @CWbreaks messaged me asking me if I had and wanted it. 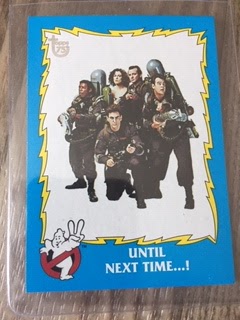 Here is a look at the card. Great looking one at that. 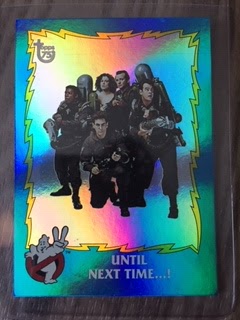 And he also graciously passed along the rainbow parallel. Now I want the other parallels in Diamond Anniversary, Modern Gloss and Printing Plate. The rainbow foil card alone looks amazing.

Another thing to note about this card, the phrasing at the bottom. Until Next Time... Well, after so, so much time has passed, THERE WILL BE A NEXT TIME!! And that next time is on July 10th 2020. That's right, a REAL TRUE SEQUEL will finally hit theaters!! I know many complain about the all girl movie, but honestly I loved that one as well. It was it's own entity. Now it's time for a real sequel and i hope the cast returns in some form or another. They have to right?

Thanks to @CWbreaks for the mail day. I must also mention that they are a must follow, I know I throw that word around a lot but I wouldn't suggest you follow someone unless it's worth it, as they are always doing giveaways but also shares his mail days and TTM scores. I have learned some more about TTM because of him.
at February 27, 2019