I Made A Brilliant Guess

When it comes to math and estimations, I am usually not the person to turn to. My guesses are so far off from the actual number.

The other day I was talking to my father about some rookie cards, specifically DiDi that he was looking for, and I was like "Yeah, I can trade you one. I have at least 10 of him." Well, I had two. Yes, two. I normally don't like trading rookie cards away of hot players unless I have 10 of them but I still pulled the trigger despite my complete under-guessing.

However last week, I was close on a guessing contest. Very, very close.

@BrilliantCards held a contest for you to take a guess on what his rainbow lot of Goodwin Champion mini cards would go for. My guess was $34.45 with the winning bid being.....$34.33. I was the only one even close to that guess. .12 off. I don't think I have ever come that close to guessing anything like that so for that day, I felt like a math champ. Just that one day.

Anyways, the prize was a mystery pack and mystery pack it was. I looked in my mail box and saw a package from COMC that I wasn't expecting. I actually haven't even ever ordered from them so that was even more of a mystery. Upon opening the package the mystery was quickly unraveled when I recognized where the package came from.

I was not only surprised by the package itself, but by the contents as well. 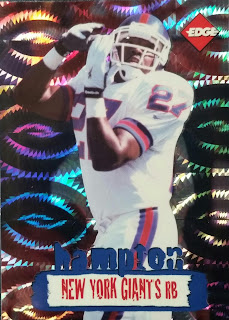 Next, another numbered Rodney from one of my favorite sets all time in 1997 Totally Certified.  This one is the blue version numbered to 2100. This entire set looked amazing and as always with Peel Off stickers, I keep them intact. 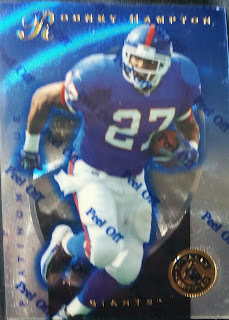 Up next a numbered to 725 Phone card of my main man Rodney. 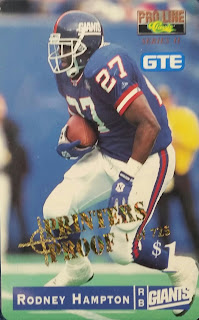 Following that, one of my favorite Rodney Hampton autographs. This one is from Topps Archives and features a throwback to his 1990 Topps rookie card. I have heard that Rodney doesn't sign much at all anymore or even TTM as I was looking for an address. So adding autographs of the man won't ever bother me. 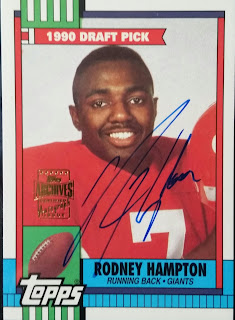 And finally, a new addition to my Psych relic set. I was so stoked to see this card as I haven't added to that PC in some time and been needing to.  It's also my first Carlton Lassiter addition as I don't have his autograph from the first set. 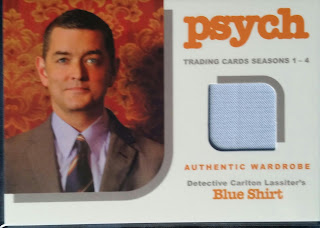 A tremendous thanks goes out to @BrilliantCards for the mystery giveaway prize pack. You made my week for sure. Go give him a follow for giveaways and some great deals on sport cards and non sport cards.
at May 09, 2018