Sending Along The Hits

Dennis over at Too Many Verlanders blog fame sent me one-well-rounded mail day.

Yesterday you saw some Giants and 90's inserts, today, you are checking out some hits he passed along. 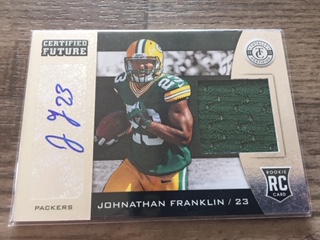 This Franklin I claimed from a pile of autographs he had up for grabs because I have friend who is a big Packers fan I am passing it along to. That friend has helped me with many of my projects on here and least I could do. 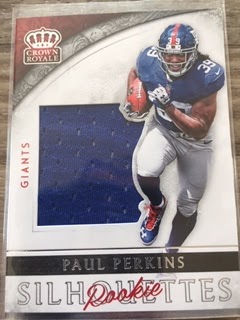 Paul Perkins Silhouettes jersey. These look just as good as the autograph versions. 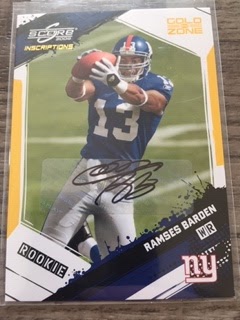 Ramses Barden never really got a ton of playing time with the Giants so didn't make a huge impact. I find his autograph to be curious. What's the scribble above his RB? 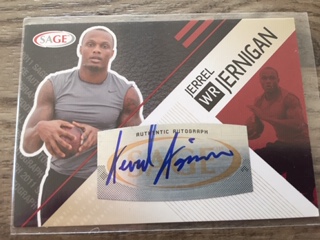 I liked this guy a lot when he got playing time. Reminded me of the Giants Steve Smith. He was crafty and could make plays which he did in games he made starts. However, the Giants didn't see it and cut him. He now is a High School WR coach 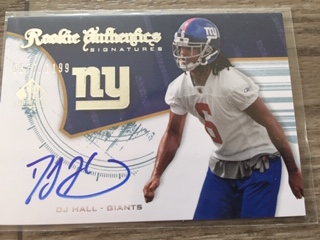 I don't remember much about Hall, but I remember landing plenty of his cards. I didn't however land this Sp Authentic one. I have always been a fan of adding SPA when I can. Upper Deck had a great product line with that. 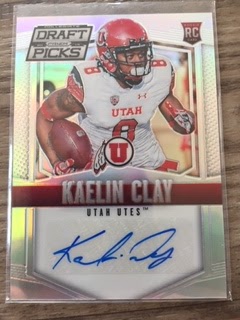 Clay was supposed to help the Giants return woes with his speed, but, when you muff a punt in the season opener at a critical spot, well, you don't get too far with the team. 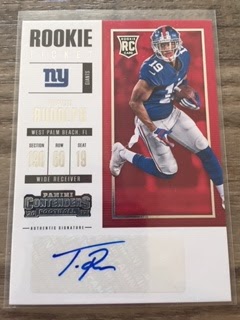 Travis Rudolph was a guy I was very high on after watching him in the preseason of 2017 as he was explosive and I was dead set on this guy making it big. Well, he only had a few receptions and a few yards in the minimal opportunities the Giants gave him. Now he is playing in the CFL. However, he is only 24 years old so his shot at the NFL is not completely out of reach.

And this wraps up another fun, exciting, joy jumping, mail day from the man, Dennis. Thanks again my friend and I need to hit you up again soon!
at March 26, 2020