Autograph Of The Week:Joe Judge

The last couple of years, I have reached beyond athletes. I just don't care about scoring TTM autographs of athletes.

The Giants finally fired Pat Shurmur, who is a good coach, just not a head coach, and hired a under the radar guy in Joe Judge who falls from the Bill Belichick tree.

He was a special teams coach for the Patriots who believes in old school football philosophies which I buy right into. A no nonsense kind of guy I think this team has needed since Tom Coughlin left. I really like this hire. 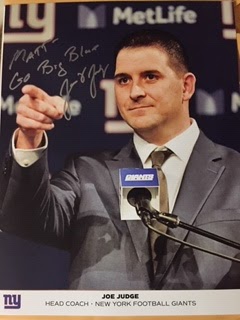 So I sent a letter to him to congratulate him and asked if he minded signing the index card I left him. But instead, he sent me back this nice signed photo. 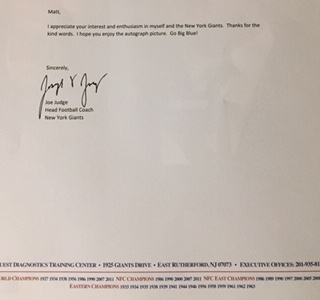 And also added in this letter.

I can't wait to see this team hit the field with him at the helm and hopefully they did enough this offseason to build a winning program. Only time can tell how the roster is and how the coach will carry what they have and how far it will take them.

Thanks for the auto Joe and taking time out for your fans. Not sure if you will see my thank you but it's here!
at May 02, 2020