Rivals. Nothing can drive a person or company more than having competition to beat out your rival.
Some rivals of the 90's include Pokémon vs. Digimon, Nickelodeon vs. Cartoon Network, Chandler vs. Joey, Britney Spears vs. Cristina Aguilera, Backstreet Boys vs. NSync vs 98 Degrees,Holyfield vs. Tyson, Reggie Miller vs. Spike Lee, Michael Jordan vs the whole NBA and Beckett vs Tuff Stuff.
What's Tuff Stuff? Well, it was the other Price Guide of the 90's and early 2000's. I say it was the "other" because not many used it. Especially at card shows. Most dealers at my local card show would price the cards they were selling using Beckett. You would find a few who would use Tuff Stuff and those people were really hard to bargain with. You see, it seemed like Tuff Stuff always overvalued cards where Beckett had them where they needed to be.

I can't say I never bought a Tuff Stuff or two, but when I did it was mainly bought for the special covers like this one, 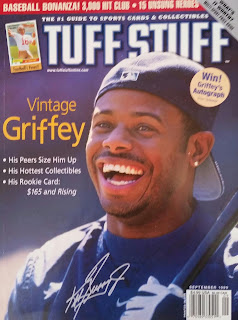 and not for the price guide. I did however enjoy some of the articles they did so I would buy it just for that as well, or for the fact they had expanded pricing on pretty much every card or I would buy when there were times I couldn't get a Beckett as Tuff Stuff was easier to find in stores than Becketts. I think that could be the reason why some collectors at the time preferred to use Tuff Stuff pricing locally. 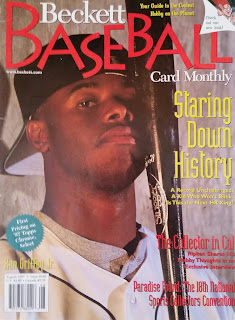 It's amazing with only one market that two price guide magazines had two different takes on values. In today's collecting it's much more complicated as many collectors use different forms of value on their cards.
You fast forward to today and must admit that Beckett won the rivalry by far. They are still on the market unlike Tuff Stuff and have expanded so much since the 90's going into Grading, online and so much more.
I sometimes flip through a Tuff Stuff to bring back the nostalgia and sometimes wonder what the hobby would be like today if it hadn't been for the emergence of eBay and if we had two price guides on the market instead.......thoughts?
at October 03, 2017