All of us I believe do a cardboard makeover every year.

You know, that time of year when you sort something differently, you have something you gave up collecting, and you find something new you want to collect. It's sort of like spring cleaning when you clean things up, get rid of stuff that no longer interests you and rearrange your house.

My Cardboard Makeover usually begins after the start of the New Year, but this year it has taken me awhile to find my way and get that makeover done.

So let's take a look at my Cardboard Makeover so far. 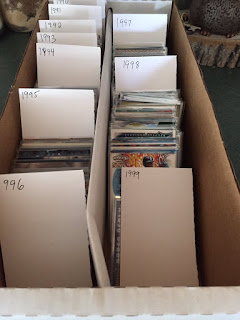 I have dismantled apart my Ken Griffey Jr collection taking them all from a binder they have been in since the 90's and sorted them by year, put them into penny sleeves, uploaded my haves into my Google Sheet want list and placed them afterwards into two BCW shoe boxes. Never thought I would ever move those out of a binder, but I did and I am enjoying it. It has also helped me eliminate getting dupes and giving the ones I already had away.

Another thing I have started to do as of recent is a bit of a lazy escape. I usually stick all of my sport inserts in binders, but recently I find it a lot faster to place them into shoe boxes by sport instead of them sitting on my desk for months waiting to be placed into individual binders that I have to dig out. I am not sure if this idea will stay or not, but it may if I find it efficient and keeps my desk cleaned for other sorting.

I have also begun starting to move my NY Giants hit cards around and trying to find them a new home where I can separate them by player in. I may need to find some more shoe boxes to do so. 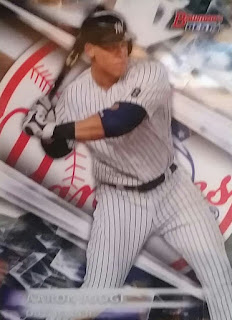 I have noticed myself losing more and more interest in watching baseball. It came back to me in 2017 for awhile when Aaron Judge came out of nowhere but has dropped off after the playoffs that year. So, I decided that there was other stuff I preferred to have more for my PC than baseball cards. In a corresponding move, I found another Aaron Judge collector willing to help me land other cards I wanted and we worked out a trade where roughly 2/3rds of my collection of him left. I did get to keep roughly 40 cards still with most being ones I would have wanted to keep in the first place. So far I have not regretted trading them away and feel good about where my overall PC is heading instead.

Actually I find baseball cards in general I haven't really been adding much to other than rookie cards or rookie autographs which I do for all sports anyways. I will still take Juniors (when have I not) and even Judge still (would replenish what I got rid of). As for NY Yankee cards that are not 90's inserts, well, probably not right now. I have other pressing needs. I may actually look to trade some of my Yankee hits for other cards I need.

There are other baseball cards besides rookies and rookie autographs, hitters only, that would interest me and that would be filling in those set needs!

3.Collecting Something New
Football has always been my main sport and interest to collect. The Giants 2019 rookie class was loaded full of defense which I have no intent collecting besides a few cards. I will mainly stick with Darius Slayton and Daniel Jones for newbies.

Another thing 2019 has brought to my attention is getting my 90's sets I have always wanted to build as a center point. I have had some success so far but my current two projects are going to take some work and need some help.

When looking at my Top Wants right now, here they are not in any order
This was my Cardboard Makeover for 2019. Who knows what the 2020 version will look like but I bet it's not going to change too much but you never know. That's the fun part of being in this hobby.

Now I wanna know. What has been your Cardboard Makeover in 2019? I know you must have one and I bet you have one in all areas I covered. Let's hear it in comments!
at May 21, 2019