Sorry, Corey Hart came to name when I saw this Ken Griffey Jr 1997 Pinnacle Shades pop up. It was one of those cards I had wanted for awhile and finally made the decision just to grab it. 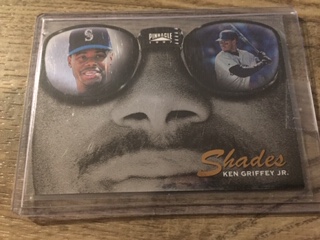 Especially since I landed it for only $4 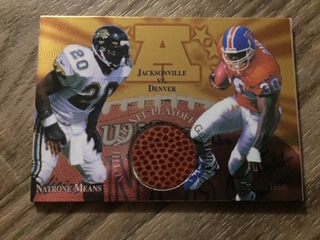 I have been really addicted to these 1997 Collectors Edge Game Balls after grabbing two Kerry Collins ones for cheap. I especially like the Playoff ones as 1996 had some great games that I still remember to this day. 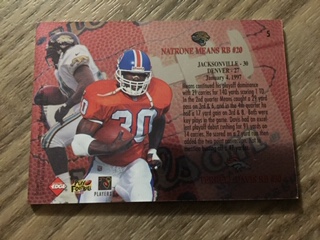 One of those games was in 1996 between Jacksonville who barely snuck in as the 5th seed taking on the mighty Bronocs. The Jags had just upset the Bills the week before and went on the road to face the Broncos who looked unbeatable. Problem was, it was just a look. Jags took a ten point fourth quarter lead and held on to win 30-27 which coincidentally was the same score of the Bills game. However, a week later they lost to the hated Patriots 20-6. Guess you can't win them all. But, being a big Jags fan, once again my second team, back then it was memorable to see those two victories.

So when I can grab this relic for $6+$1 shipping without a doubt it was worth it just for the memories alone. 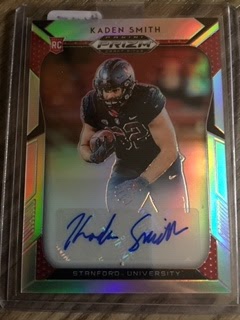 When I have a NY Giants autograph need, I grab it. And so I did for only $4 and free shipping. Kaden looks to have secured a spot on this roster for next year or at least I hope so. He can block in the run game, make the tough catches in traffic and reminds me of another Greg Kittle. This guy could be big next season. He almost had 100 yards in the Giants finale vs the Eagles. 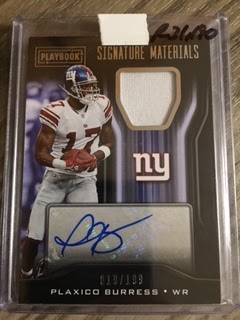 To me, the Giants wouldn't have made their Super Bowl run without Plaxico. He was the one guy Eli relied upon and nobody could stop that combo. The Giants won Super Bowl 42 because of Plax who played the entire playoffs hurt but helped lead them anyways. Not to mention caught the game winning TD in the Super Bowl. The Giants were blowing away opponents the following year as well up until Plax's shooting himself incident. Giants fell after that. But, a Super Bowl I won't ever forget combined with his game winning touchdown and talent he had when he played, I couldn't go wrong for $6.95 plus free shipping.

I showed off a souvenir stamp of Darkwing Duck before on here, so for $1.50 and free shipping, it was a no-brainer that I grab two more. 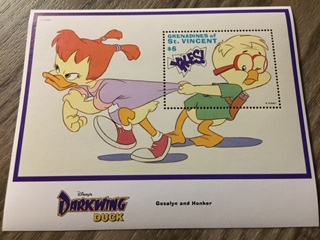 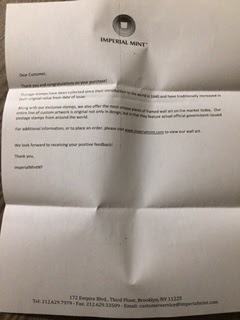 This weeks total was close at $24.95 but once again I was good and stayed under budget.

Some pretty cool PC adds this week which is what I like.