First off, I would like to say thanks to the WONDERFUL people at Panini America for providing us with this box to review. Here are many places you can find Panini America: official site, blog, Twitter, and Facebook. If you don't follow them at all..you should! They talk to you on Twitter, have contests on their blog and Facebook and the site is also fun to visit! 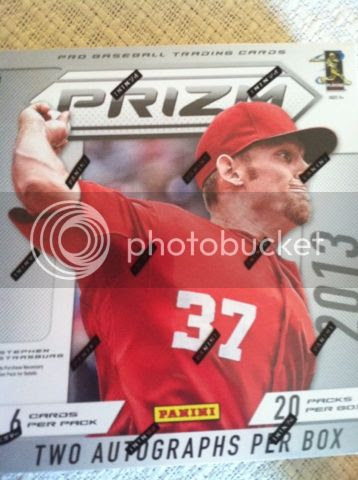 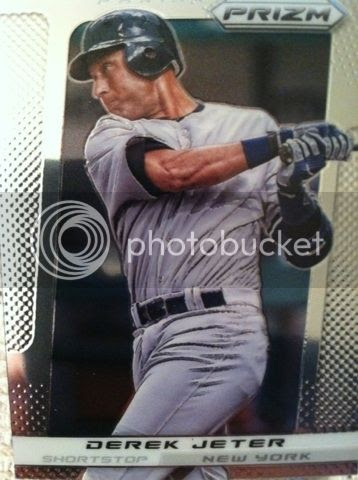 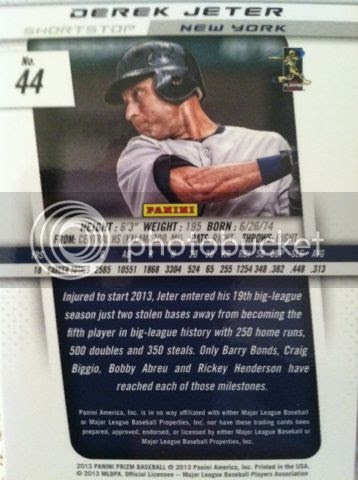 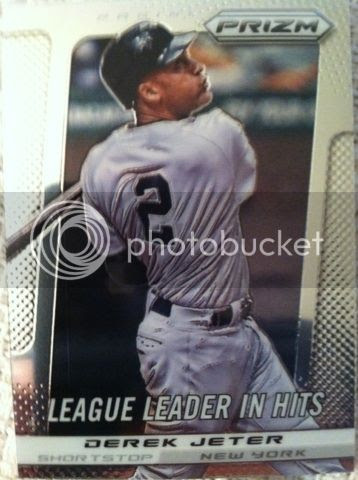 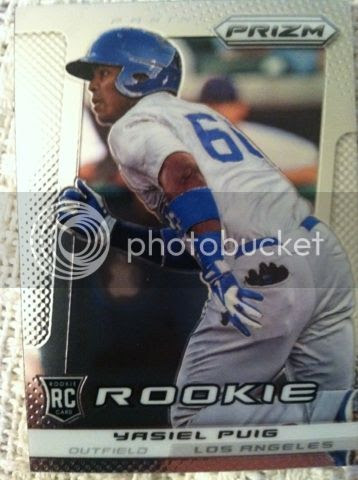 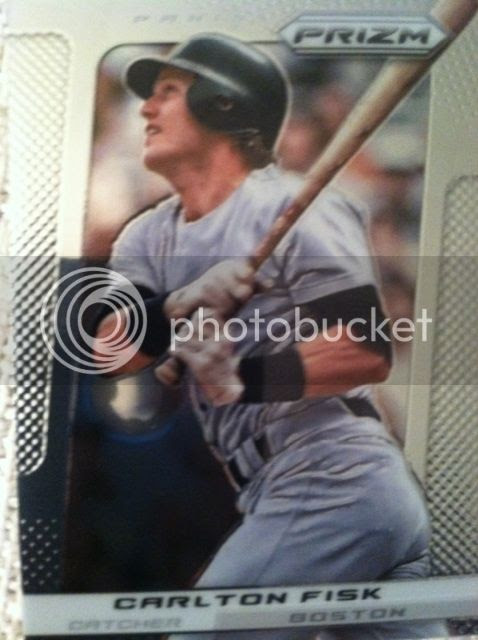 BASE CARDS: Panini's very popular Prizm returned to baseball for the 2013 with some improvements in the overall product. The base cards still have the right amount of thickness which will cut down on the bending, the design and technology is the same, the checklist of veterans, legends and rookies (1-2 per pack) returns as well. But NEW to this year is an added colored background behind the player which helps the player stand out more. I like this addition. Last years base cards seemed a little TOO much silver. Nice job by Panini on these. Now if only we can get Panini an MLB license to help with the non-logos.

You must also take note here I FINALLY landed a Yasiel Puig. 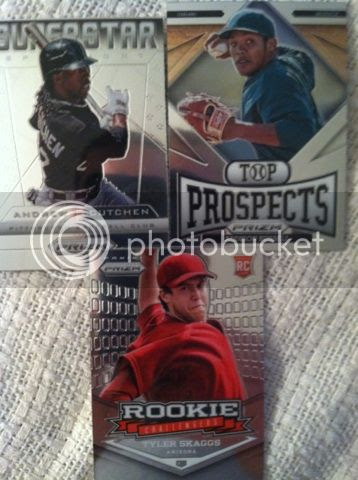 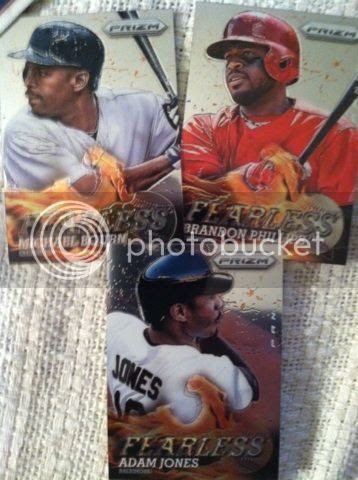 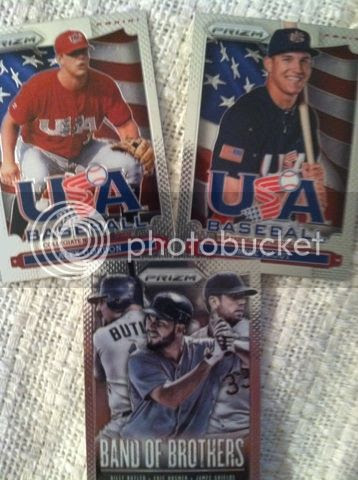 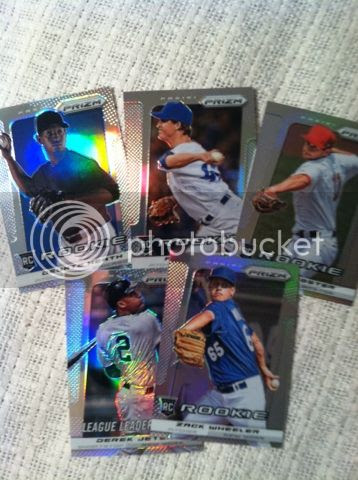 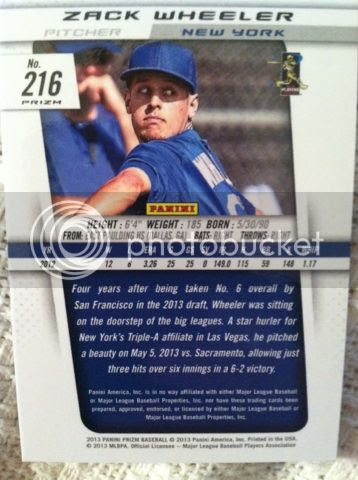 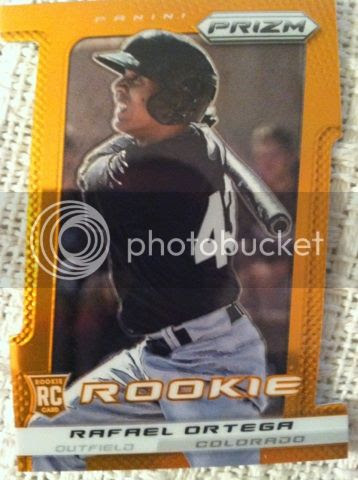 INSERTS: My biggest complaint about this product last year was it's lack of design in the insert department. This year they took my advice (least I like to think they did) and added much needed color and design to them. One of my favorite inserts in this product in terms of design is the Fearless insert. Something about the fiery flames and the baseball on the cards really standout. I like the improvements they made here.

But once again in terms of inserts for this product and maybe the product overall, it's about the Prizms. Which we also take note that Panini this year added the work "Prizm" to the backs of the parallels just below the card number. So for those who might not notice their rainbow glow will now know if they have one or not. Panini also upped the amount of Prizm's you find in a box from two to three. This box must have been a rare one pounding out 5 base Prizms and a orange die cut.

Every box should include these for inserts: 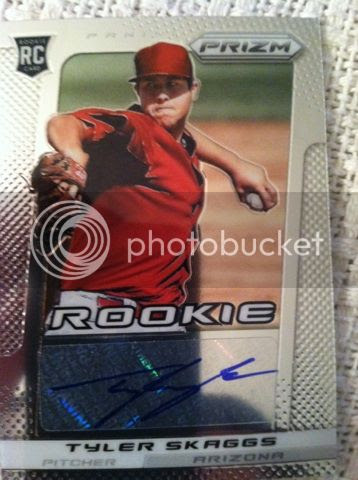 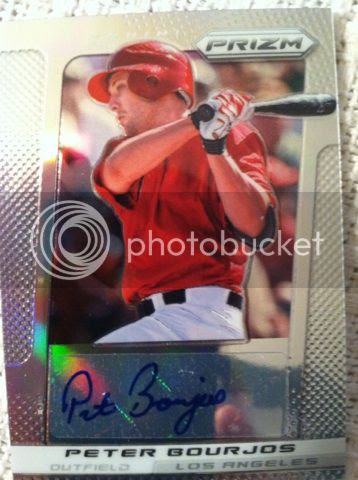 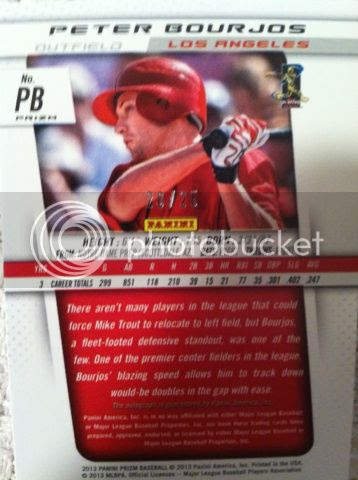 AUTOGRAPHS: The autographed cards in this product are just the base cards with autos on them. So design is the same. The only issue I have with the autographs is due to the large checklist of autos in the product, you might not always or at all land a top tier player in your box. But I guess that's how it works with any product. And the assumption has to be named that some of the big ones are short printed.

Though not a big namer, we did luck out and pull a Prizm auto numbered to 25 of Peter Bourjos.

There will be three levels of the autograph cards in this product, an unnumbered base version, a Prizm version numbered to 25 and a Finite version serial numbered one of one. The checklist is also new from last year.

JERSEY/PATCH CARDS: N/A though I think a nice swatch or patch on this technology with or without an auto would make them BOOM!

OVERALL THOUGHTS: I like the improvements to this years product overall. The design is nice. The parallels are fun chases and the inserts are improved.  I also like how the base cards don't bend. If only Panini had that MLB license for the logo's..man this would be HUGER than it already is and could possibly take down it's competitor!
at October 14, 2013