Autograph Of The Week:Cedric The Entertainer

I didn't really start to enjoy Cedric The Entertainer until he was the star of the CBS comedy The Neighborhood which is now in Season 2.

The comedy is about a white family from Michigan that moves into the "hood" and all of the laughs that come from that. It also has many heartwarming moments between the main character Calvin Butler (Cedric) and his "favorite" new neighbor Dave Johnson. Calvin always doubted the arrival of his neighbors and wasn't very welcoming unlike his family was to them. Over the past couple of seasons, you can tell that Calvin's rough exterior has a warm place in his heart for his neighbors.

I stumbled upon this autograph of his featured in Panini Americana and offered the seller a price and they accepted. 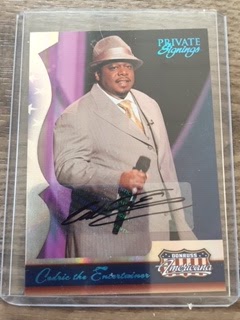 He has a solid signature and it's a nice addition to my non sports PC.

You can watch The Neighborhood on CBS at 8 pm on Mondays. And no, this was not a sponsored post. I just like to let you know about a gem of a comedy you should not be missing out on .

BY THE WAY....NEWEST POST ON THIS BLOG IS UP

Email ThisBlogThis!Share to TwitterShare to FacebookShare to Pinterest
Labels: 2020, Americana, Autograph Of The Week, Cedrick The Entertainer, Panini