The Time I Met Lee Rouson

A few years ago, my church was hosting a Men's group breakfast and rumor had it former NY Giants RB/Special Teamer Lee Rouson would be the one preaching at the event.

Honestly, at the time, I had no idea who Lee Rouson was and had to do some research on him. I found out he played in the NFL for 7 years. He backed up Joe Morris and was a beast on Special Teams winning Special Teams Player Of The Year in 1986. He has two Super Bowl rings with the Giants and was a big contributor in Super Bowl XXI vs Denver to help lead them to a win.

But most importantly, he is an associate pastor who travels as an motivational speaker for Sports World Ministries and goes all over the U.S. to churches and schools.

After I read all of that, I wanted to meet him even more so I attended the event.

The problem I had was, I was star stuck. Never really having ever met a NY Giant since I understood football, I was all over him trying to get an autograph. Score a picture. Stare at him like a stalker. Anything I could do to take in the moment. Then I heard him speak which changed my tune.

He put out an incredible message to all of us who were there. After he was done, he then waited for everyone to meet him for pictures and signed items. I thanked him for his amazing message, he even showed me his Super Bowl ring bling, then I got my photo taken with him (it's framed in my man cave) and was handed one of these, 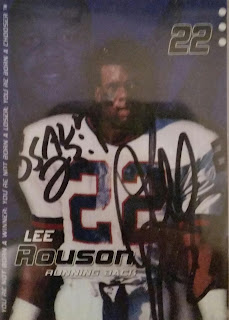 And got one of my Giants hats signed. I actually took a lot more to be signed but decided against it as that wasn't the point of the event. 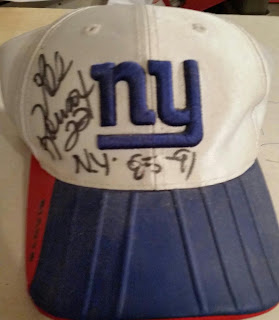 Lee, if you ever stumble upon this blog, I just wanted to say thanks again for the motivational words and for taking time out for me. I hope to see you return again soon!
at March 28, 2017