Some good rookies to find at a decent price, despite a rough overall draft class, you can't go wrong with a product like Sage Hit. So I gave a box a try.

Sorry for lack of box picture on this one. But here is the breakdown none-the-less, in every box of 2013 Sage Hit Low Series football is 30 packs and 6 cards per pack. So you get a lot of cards for your bang. Each box also has 6 autographs, gold and silver parallels and other inserts to find as well.

The base card design is nice and the pictures are well done since they don't have a NCAA license anymore. Instead of photoshopping out the logos, I like the way Sage did these pictures. 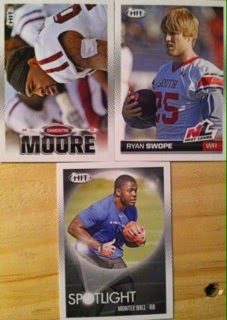 The top two cards are silver parallels, you get one per pack. Bottom are gold. You get roughly a couple per box. 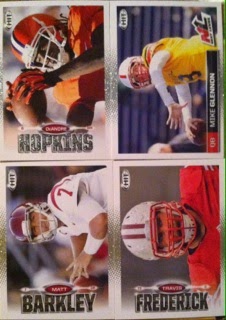 The Write Stuff insert you find one per box. The other two inserts including Steelers star RB Bell are found a few per box. 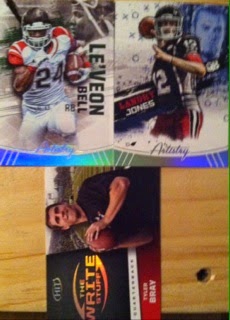 And here are a couple more including a harder to find gold parallel version on the right. 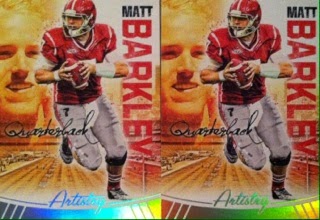 Now the autographs. This is the red autographed version. That just means the card is red.  I didn't hit the big players, but got some decent ones like Manti Teo

and in the golds, Eric Reid. I like the gold autograph version more with the hand numbering. Very cool and something that Sage has done for years.

Overall, you can't argue with a $30 product that gives you almost 200 cards (though most base) and 6 autographs. Big bargains and possible nice finds could be found here.
at February 09, 2015