From 1998-2007, Tampa Bay's baseball team was known as the Tampa Bay Devil Rays. The name was based on the manta ray. It was a pretty cool logo and name coming from the sunshine state. 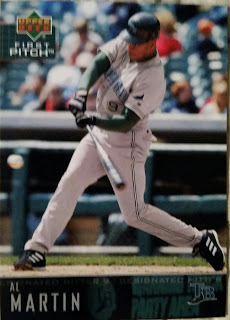 Then in 2008, the team had a name change to the Rays referring more to the "rays" of sunshine instead. I guess the name change also changed their attitude as they reached the World Series that year and have been contenders for the most part since. 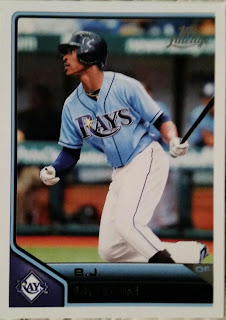 When it comes to cardboard, for me, I would rather see the Devil Rays. I think the logo looks better on cardboard and the color scheme as well. The colors for the Rays uniforms are bland and some similar to the KC Royals. I liked the forest green and blue uni's with the colorful Devil Rays written across the front of the jersey. The name was cooler too. Imagine patches from that jersey embedded into cards...yeah, sweet huh??

Alright guys, I pass the question onto you, what do you think, Tampa Bay Rays or Tampa Bay Devil Rays???
at May 24, 2016