The Origins Of A Cardboard Addict:The First Undefeated Down

It was 1998. It was football Sunday and I did what I usually do even now, watch my Giants play football.

The Giants 1998 season wasn't a great one. The Giants staggered into their Week 15 match up with a record of 5-8 while their opponent the Denver Broncos came in at 13-0. I thought for sure it was one of those games where I would be sorting cards halfway through it. It was another David vs Goliath match up with both rosters having big talent discrepancy. The Broncos coming off their Super Bowl win the previous year and destroying their way through their 1998 schedule.

Ugly could be seen from miles away even though some sportscasters said this looked like a trap game for the Broncos.

I had prepared myself before the game and put a stack of football cards on the coffee table-when more people used those-and brought out my notebook to jot down what they were. That's how I used to organize everything. I would write down every card and how many cards I had in my collection. There is no way I would I have time for that today. I have enough trouble keeping up with my Giants collection on here.

The game started and I was in a state of shock and some excitement as the Giants had kept the high powered Broncos close into the 4th quarter. The Giants actually led at halftime 10-9 and at the beginning of the 4th quarter 13-9. But, I had a feeling this wasn't still going to end well.

I mean, this was a Broncos roster that featured some these guys on this autograph helmet I recently acquired in a trade from my buddy @Jake1725. Back in 1998, the only autographed memorabilia I had were a few NY Giants Post-It notes from having met a few players in person. I definitely didn't have anything this cool. If I had, it would have made it's way to school as a show and tell item for sure.

On the helmet I acquired from Jake, were autographs of  Terrell Davis, who I have spoken about highly many times on here, 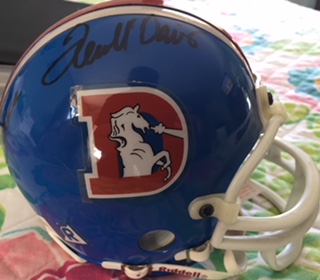 Keith Traylor (one big dude), Jason  (one of the NFL's greatest kickers of all time) and the Coach Mike Shanahan who was one of the best. I only count his years in Denver. Not sure why he bothered with Washington. 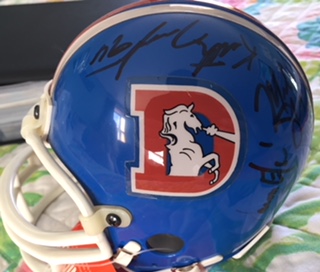 I felt that the Broncos with those kind of names on the roster were pretty much unbeatable.

The slim NY Giants lead was soon gone three minutes later in the game when that guy above Terrell Davis took it 27 yards to the house. Davis had run well all day with 147 yards on the ground. The Broncos then led 16-13 and I felt deflated knowing the Giants offense hadn't done a lot against Denver's defense.

I went to school the next day like a champ!

For the 1998 season that was my Super Bowl. That was a moment I will never forget. Just like in Super Bowl 42 when the Giants beat the 18-0 Patriots. Both of these games will forever live in my mind and now with this cool autograph helmet, I won't ever forget. I have plenty of Super Bowl 42 memorabilia to help my memory there.

Thanks to Jake for the helmet and bringing back those memories from my Origin. I still have plenty of other memories and cards to dive into for 1998 so this is just the beginning. However, this game brought me even closer to football and really upscale my football card collection that year. It was also the first year I began playing football.

If you have an extra minute, I suggest you go and check out the Giants game winning drive here. It will be well worth your time,
https://www.youtube.com/watch?v=ObQCv42J2tI
at September 27, 2018