The excitement of the NFL Draft is tonight. Finally some sports to watch. Even though this years draft will be quite different than any draft we have ever seen, it's an important part of the NFL's future including my NY Giants who draft at 4.

What am I hoping to see the at 4, well, Giants have needed a defensive play maker for a very long time. VERY LONG. Isiah Simmons would be a mistake not to draft at that spot. He fits exactly what they need even though its rumored more and more of an offensive tackle at 4. Please, don't draft an OT there. This draft is deep with those, grab one in the second round.

No matter who the Giants draft, it appears I won't do much with 2020 football cards and Giants pickups since I am more of an QB, RB and WR collector for them. Not that I don't try to at least grab a few cards and one autograph of any person they draft.

Speaking of 2020 football cards, it was appearing this would be the first year I wouldn't have a single card of 2020 stuff before the draft. Without Walmart access and much for funding, the path was dark. That's up until my father finally packed up my end of our trade from months ago to send out (more on the trade and why it took so long next week) and tossed in a pack of 2020 football cards for the wait.

I shared my results of this break already on Twitter, but it didn't appear many eyes viewed it so thought I would share it on here as well. Not to mention, it also helps fill in another day on here. 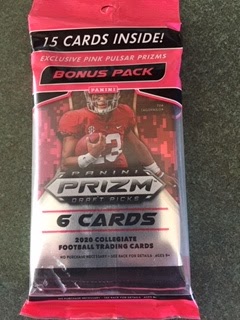 Each hanger pack of 2020 Panini Prizm Draft Picks football NOW has three packs. It used to have four. Now it has two packs of 6 cards and one pink pulsar pack of three cards. The price of these also went up to almost $12.  Cost more, less cards. Hmmmmm.. 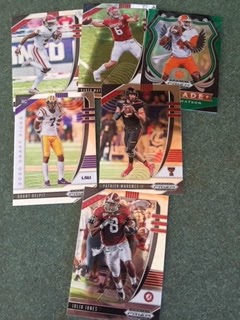 I don't know a lot about this years draft class other than the big names I hear passed around, but I was glad to at least find one of those in Pack 1 with CeeDee Lamb. I also found a nice looking Green Crusade of Watson 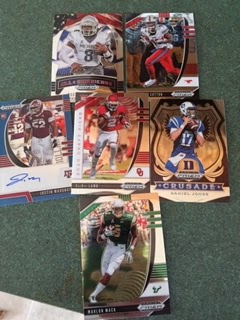 Second pack...BOOOM Autograph find. I have never pulled an autograph from a Prizm hanger before. I haven't ever heard of this guy and it's not an offensive player, but still pretty cool to find. I also found a Crusade subset card of Daniel Jones so that rocked as well. 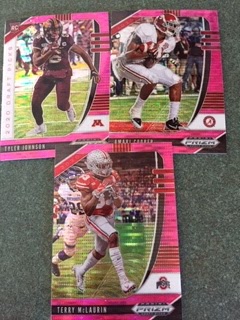 And my pink pulsar pack had these including Amari Cooper. Think I know of a bama fan who will enjoy that one.

Not a lot of big names found in here but at least I have a few rookie cards for my binders to start. I will still need to find the bigger names to have at least one card of for my collection like I do every year and of course chase down a few singles of whoever the Giants draft as well.