The Origins Of A Cardboard Addict: Remembering What Once Was

As the years go by, the times change and everything around them does as well.

So much has changed in my area since I have grown up. We lost great stores like Ames and the May Store which was a hobby craft store that carried sport cards too. We lost many great community leaders and recognizable names in the newspapers. Where I grew up used to be all woods around my house and now has been developed. Most of my friends I grew up with have moved away from the area and this once cardboard hot spot known as my LCS no longer exists. Yes, no longer exists. 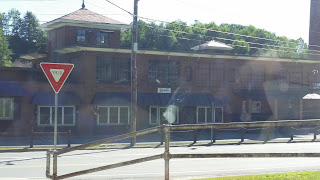 This spot has been so much over the years since my card shop left it over 20 years ago. I have seen an Canoe Shop, Bagel Place, Pizza Place, Pool Shop, some small ma and pa shop selling tools and now it currently is a place for women who are in rough relationships. The one thing it never became again was a card shop. Once it's gone, it's gone folks! That's why I preach to keep the card shops alive all of the time because you won't realize how much you miss it til it's gone. Believe me.

Also gone with the card shop are local card shows and most of the collectors. I have said before how I have never met another collector around here.

Another thing that is gone forever is great card sets like Upper Deck's 1996-1998 Spx card line. You know, those beautiful cards that were die cut, have Fx etching and a side hologram usually of a players face.
As most of you know who read this blog regularly, I have been trying to build all of the sets from all of the sports from that era. I have done pretty well so far with completing all of the football ones, the 1997 baseball edition, most of the 1996 Baseball and some starts on the hockey. I also have the Dan Marino and Joe Montana tribute and autographed cards from 1996 football along with some set and parallel starts as well. I want it all but have so far to go still.

Fortunately, for me, recently I got some set help from The Chronicles Of Fuji  for my 1997-1998 hockey set which I am a long ways from still finishing.

I think my biggest problem with this set is, I didn't buy any from it. I had some from the 1996-1997 edition, will take you back to that one soon as well, but just like everything else around here, the 1997-1998 left before I had a chance to snag any. So this one is being built from scratch.

It's the design however that takes me back to my childhood. Out of all of the years this set was produced, the 1997 I think looks the sharpest with it's die cut and layout.


There are 50 cards in this beautiful set and I am pretty sure you will agree with me how great this set actually looks. I love the hologram layout with the players face in the forefront and an action shot in the back.

Fuji helped me out with four cards in towards my set giving me four out of the fifty so far.

Mike Richter was one of my favorite NY Rangers in the 90's and he helped lead them to the Stanley Cup in 1994. He also played his entire career with the Rangers retiring in 2003. My favorite, The Great One of course. 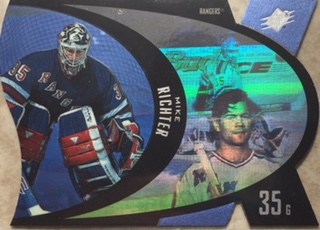 Curtis Joseph was one of those dominating goalies I loved to watch. He is also one of the all-time greats who had one time had the most wins by a goalie on a non Stanley Cup winning team. 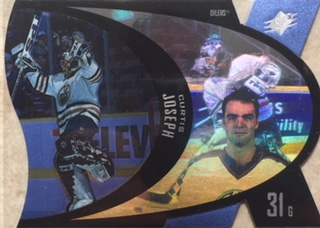 I don't know a lot about Koivu other than him being the longest serving Captain on the Habs. I wasn't ever a huge hockey fanatic, but I did start to watch more hockey in 1997 as a NY Rangers and Colorado Avalanche fan. 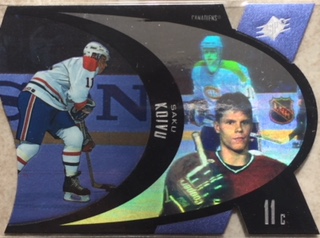 Pavel Bure another one of the greats to play the game. I added his Prizm autograph a few years ago just to have it as he was named one of the 100 greatest players ever to play in the NHL. 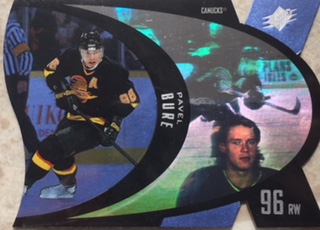 A thanks to Fuji for the set help and nostalgic take back in time.

Another thing about things that change or leave, sometimes they do come back but are never the same. For example. Rosanne. They brought back the hilarious show and it was pretty solid up until she said some words on Twitter, something in the 90's we didn't have to worry about, got herself fired and now Rosanne is Rosanne without Rosanne. It's not the same. Some of the foods from the 90's I ate growing up made a return but never tasted the same as they couldn't mock what once was. Cartoon revivals like TMNT and Ducktales, don't get me even started on those.

Even the 1997 Spx design came back in new Spx products as an insert but fell way way short of the original. Just take a look at one of the cards, 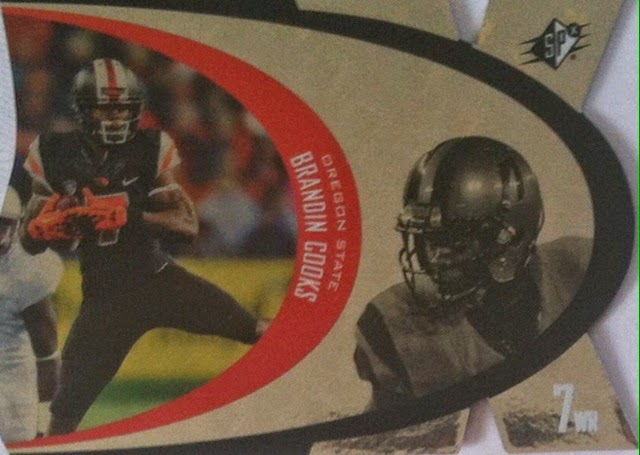 Gone is the hologram and Fx etching. The two most important parts of the product that made it outstanding. Instead it was replaced with lazy foil.

I do wonder sometimes what it would be like if a card shop got revived in my area and what that would be like. Would it be that same feel I had in my youth visiting it? Would it be a place that's just about making money or would they welcome you like family? Would collectors and card shows return? Even though I wonder and wish sometimes, other times I fear it would only disappoint like other things that have been brought back.

The one thing I will always have are the memories and the cards back from them. It's something that will never change and hopefully with old age doesn't get forgotten.