Two wins in a row. 3-7. Three games out of the division. They scored close to 40 points.

There are many things about those short sentences I never thought I would say.

Another, would be Vintage Eli. It felt Eli knew his time was coming to an end and he wanted to prove he still had it and has he ever. In the 38-35 defeat of the Bucs, Eli only had one, yes one, incompletion the whole game.

That game for Eli was just as sharp as these new Eli card adds I got in my latest trade @90NicheFBCard. 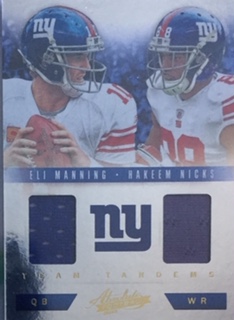 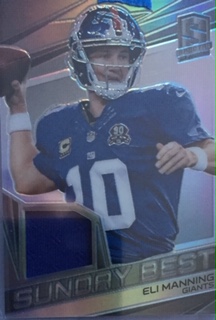 Seasoned Pro Swatch. This beauty is numbered to 88. 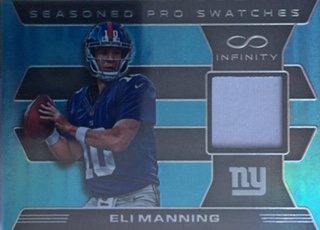 Bryan also tossed along a couple other Giant young studs in Odell, who is having a career year and Sterling Shepard who has shown tons of potential. 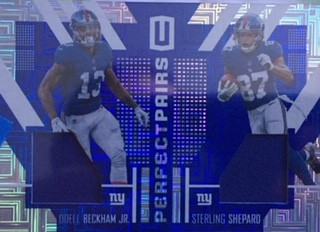 Finally Evan Engram who finally showed up last week against the Bucs on a huge 55 yard catch late in the 4th quarter that eventually led to Saquon's third touchdown and sealed, well if you call it that, the deal for the win. Love the two color patch. 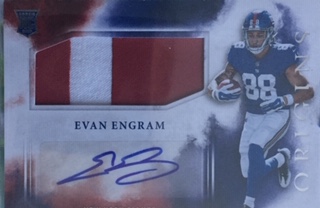 This wasn't all that was involved in this trade. There were two autographs that I will reveal only on Christmas and there is a reason for this. Wait til you see them....

Thanks goes out to Bryan for yet another great trade and NY Giants, I do believe in miracles and the biggest one you can show me is win in Philadelphia for the first time since 2013. That's a long time. But, if you all have bought into Odell's win out philosophy, let's see it. Go Big Blue!
at November 25, 2018