What was a Panini card break tweet by Twitch Collects Cards blog turned very quickly into a trade and that one card trade escalated to a multi card trade.

So with a multi card post, this usually means a multi-post series and that's what you will find with this trade.

There were lots of cards sent from Twitch you won't see to help me shorten up this post series. But, I loved every bit of my first trade with him.

Today we focus on baseball addition. All new ones at that which isn't always an easy taks. Most of these are from older Topps Allen and Ginter which I really didn't get into until the last few years.

Jeter and Tex. Love the sketch renditions on these. The Tex celebrating around the bases is probably my favorite of the group. 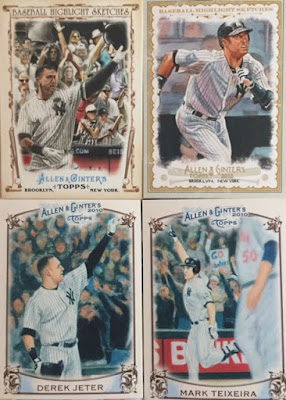 UD Masterpieces was also a great looking card line by Upper Deck. I would have liked to seen more. The older players look incredible. The Gehrig and especially the Babe Ruth are very eye appealing. It captures what the game is truly all about.

Another new Tex, a Cano from a Bowman's Best brand I haven't seen and Austin Romine rookie from my favorite baseball card product.

My first WBC materials card and from one of my favorite products. I liked having Johnny Damon as a Yankee but when he was wearing that awful red he was one of my least favorite players. 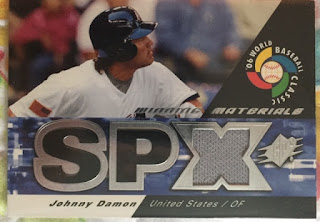 I will also note that I have never once watched a WBC game. I don't care much for those kind of off-beat don't count for much things. No more than I watch any All Star games for any sport. It doesn't appeal to me.

My unique swatch PC got a couple of nice additions. One with this base swatch of Jason Giambi. 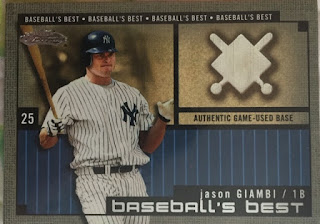 Giambit had some great seasons in NY. I just wished he hadn't been apart of the PED search in which another player I liked I had to turn on.

And a non Yankee one in Dewon Brazelton in which I get my first Fielding Glove card. I had no idea they made cards with those swatches and now I have one. Awesome! 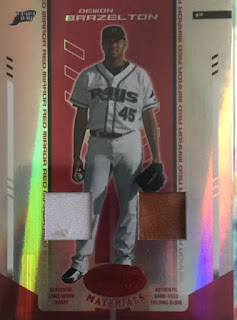 Brazelton on the other hand not so great.  He had a 8-25 record in the majors with a 6.38 ERA playing for the Rays and Padres.

This is just part one of this terrific mail day.

Tomorrow we will tackle Part 2 in which I will show off the card that began the trade talk as we also discuss another Big Blue Sunday. Make sure you don't miss that one!
at November 17, 2018