On Twitter, I saw a tweet from Cards on Cards that he had discovered some football card finds from Goodwill and was looking to move them.

I see that as an opportunity knowing how much I love collecting football cards.


So I checked out his post and noticed that the cards fell right into my liking with most of it being 90's parallels and inserts. So we had a discussion and pulled off a trade.


My mail day arrived a few days ago so let's take a look at what I landed.

Some NY Giants. I know I normally wait to post these for Sunday's, but I am a bit backed up on that already so I am posting them now to get myself caught up. Here are some Topps Gold parallels. 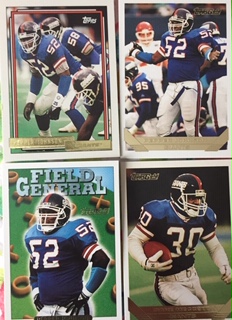 Wild Card was such a deep set. It pretty much covers most of my wants for Hamptons for the early 90's. So hard to find some of these striped parallels. 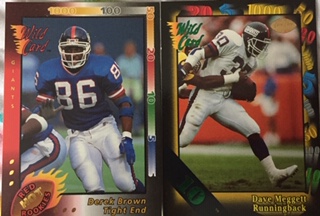 A few guys I enjoyed watching. Tyrone Wheatley had some great seasons in Oakland just not in NY. Phillipi Sparks made some big plays on defense for the G-men and even is the father of Jordin Sparks who was on American Idol. I will always take in Victor Cruz cards. Wished the guy hadn't gotten injured as he had such a bigger future ahead with the Gmen. But, I do appreciate his time there and his big Super Bowl touchdown in 46. 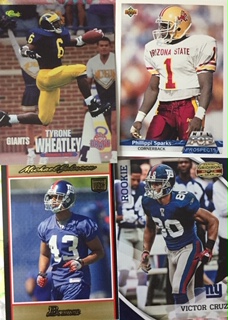 Another Wheatley and a Dave Brown. 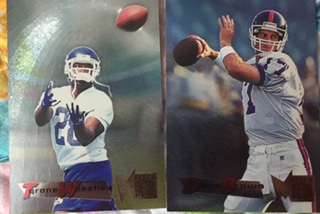 Love this photo. That appealed to me immediately. Upper Deck did rookie photo shoots the right way. 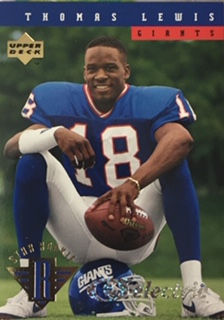 That ends the Gmen, but he we are with some 90's parallels. Upper Deck Electric Silver. 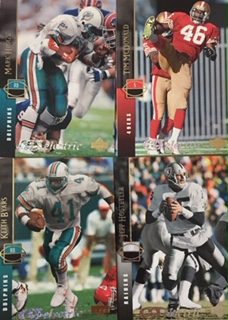 I dig the Collectors Choice gold parallels from 1994 and who doesn't love Crash The Game inserts especially of Hall Of Famers. But, the card that really caught me was the Nemeses one on the bottom. 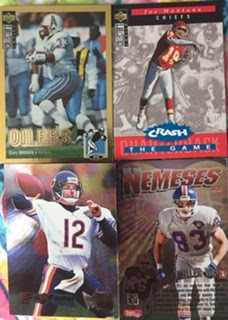 Gold Prism and a Cris Carter to help my set needs from 1995 Ultra awards. 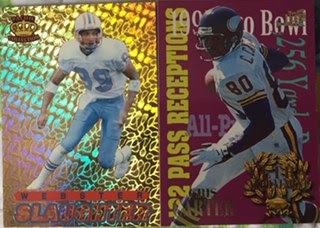 1994 Ultra 2nd year standout inserts include Jason Elam who I consider one of the greatest ever to kick. 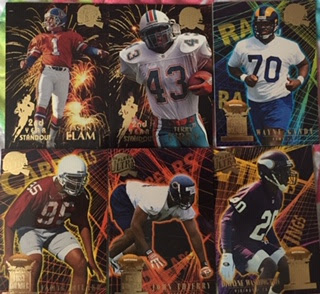 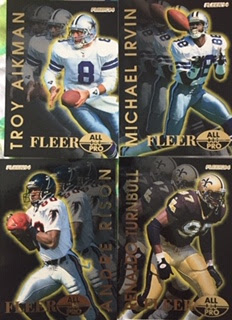 Some draft prospects from 1994 Fleer including Mario Bates and Errict Rhett. 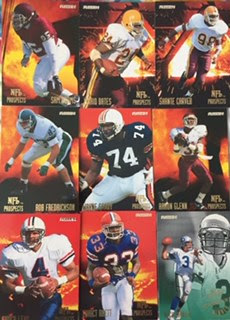 I found goooooooooooooold! Gold Rush inserts were some of the coolest early 90's parallels besides.... 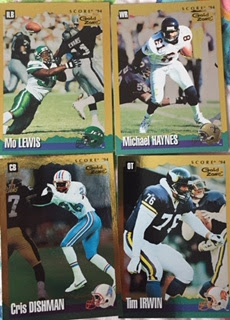 these. Nothing topped these Special Effects early on. Not even the first refractors from Finest. These are what got me hooked onto football cards. Once again, this would be another fun parallel set to build along with my many others. I just may chase it especially with six more to help me out. 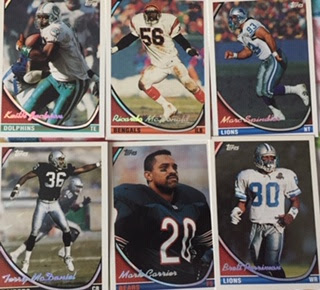 A big thanks to Cards On Cards for the mail day and great trade. I hope if you come across any more football like this or NY Giants that you will remember me.
at November 27, 2018