*In A Deep Voice*
This is a story of one collectors chase. One collector who searched all over the world for one card. One card he questioned many times if it even existed.

This collector decided it was time to tell his story of his chase. So be ready, pull up your chair, grab some coffee or cocoa, a snack as this collector's chase story begins......

It was roughly four years ago I decided I needed to start a Super player PC other than Ken Griffey Jr. As we all know, Ken has so many cards, so many expensive cards and is collected and loved by many. It would pretty much be impossible for me to chase them all as I don't have the funds like others. I haven't given up on collecting Ken by any stretch, but I can't battle with the big boys for him so I only take what I can.

One of my stipulations for a new PC was that it had to be a NY Giant, had to be from the 90's since that was my favorite time of collecting and had to be a good but under the radar player that I enjoyed growing up watching. Immediately Rodney Hampton came to mind and my mind was set.

I was going to be the one and only Rodney Hampton Super Collector.

So for the past four years, I have been in Hot Pursuit of chasing all of his cards down. 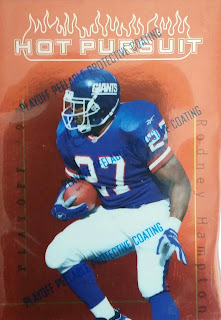 Early on in my Rodney Hampton search, I knocked down lots of base and low end rookie cards while sprinkling in the occasional rare insert. When I got gift cards for Christmas, I would use them wisely and find a place that offered free shipping and I would scoop up the coolest looking cards first. You know, shiny, numbered and acetate. Oh Yeah. Love the 90's cards.

One of things about chasing a guy like Rodney, he doesn't have a lot of autograph cards to chase like today's guys. He was before the autograph and memorabilia explosion times. So I found myself adding autographs pretty cheaply and having trading buddies who already had some. I was off to a stunning start over the past few years. Other than a 2002 Topps Reserve Autograph mini helmet, which I wasn't going to bother chasing since it wasn't a card, there was whole glaring gap in my Rodney Hampton PC. One autograph I hadn't gotten yet. The 1997 Stadium Club Co-Signer of Rodney Hampton and Anthony Johnson.

This is where the true story begins.

So I began my journey. I searched all over eBay. Checking it daily sometimes even twice a day and this was my search results every day. 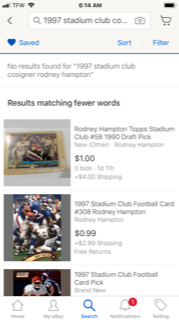 So I went and hit Google up which once again led me to nowhere. 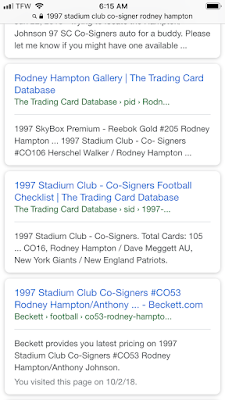 So here I was. I haven't ever seen the card listed in my many years search and even though many websites say that it existed, no pictures were present on any of those sites of what it looked like. I began myself questioning if the card was real. Did it exist? Was I going to find it? I began looking at different avenues to try and locate the card and that's where the next part of this story begins....
at November 24, 2018