You May Or May Not Know

As the NFL season goes on, bad teams have a tendency to dig deep into their pocket of players on the Practice Squad and call them up.

The Giants are one of those teams that recently dug deep into Practice Squads for players to add to the roster hoping to find that next gem they can carry over into next season with.

I also try to dig deep in my collection to see if I have anything of those players so I can add them to my Giants PC. Sometimes I do, other times I don't. Luckily this time I found a few they recently added.

Tony Lippett. This once 5th round WR pick turned corner for the Dolphins and looked promising til he got injured. The Giants liked his potential and snagged him up. He will be wearing Eli Apple's old #24.

Upon digging, I found two autographs of his, 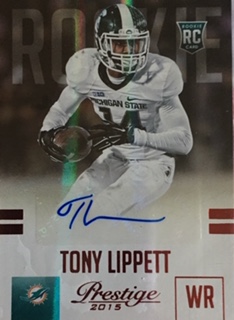 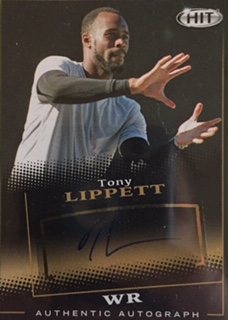 B.W. Webb was drafted by the Dallas Cowboys in the 4th round of the 2013 NFL Draft. He didn't make it there and played for seven teams in six years, before the Giants picked him up to play here.  So far he has played great I think and is now a starter after the trade of Eli Apple.

Pulled this card in a bonus pack of Fleer Retro. 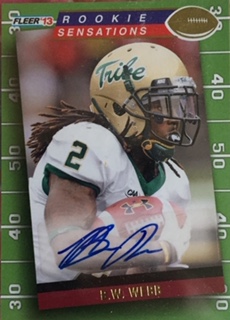 Giants signed WR Cody Lattimer in hopes he would give them another go to guy but injury bug hit him. So the Giants found a former 1st round pick just sitting out there in Corey Coleman and gave him a shot. He has a lot of raw potential but some off the field issues have held him back. He is here for now and I still have his autograph rookie card I snagged in Wes' World Wide Of Trading. I must have known about where he was heading years ago. 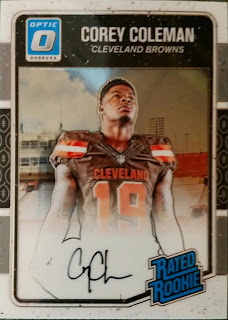 That's all I could find of new additions for now. I am sure as the season progresses more names will pop up I will have to research and see if I can find.

Here are a couple of names I won't have to look up. This is a newly added Saquon Barkley/Eli Manning Spectra dual swatch card. It's a beauty! 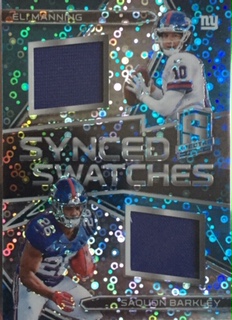 The only tough part is which player do I use the card towards in terms of number of cards and relics? It's the way my numbers are set up that I can only choose one as it's one card not two. I will have to choose one or the other and I am leaning towards Barkley at this point.

How many of you guys scout your collection for those fresh out of the box guys on your teams?
at November 14, 2018