The Origins Of A Cardboard Addict:The Wonder Years

"What would you do if I sang out a tune?
Would you stand up and walk out on me?"

If the title of my blog post doesn't stick these lyrics in your head and make you sing the rest, you better leave now. Only because that was my intention. Oh right, you can hang around anyways but I suggest you Google The Wonder Years.

If you haven't ever watched it, The Wonder Years TV  was a coming of age dramedy that starred Fred Savage depicts the social and family life of a boy in a typical American suburban middle-class family from 1968 to 1973. Which is 20 years from when the show ran from 1988-1993. It sounds boring, but believe me, it wasn't. I never missed an episode and it was too bad the show got cancelled because ABC and the producers couldn't agree on where the story lines would be moving forward. I would have liked to seen where the show was going further.

For me, the Wonder Years of my life was the late 90's. Lots of memories and lots of growing up had to happen in that time especially in the 1995-1999 time frame.

But, just because I had to grow up, it didn't mean I didn't enjoy the simpler things in life. If I wanted to play with my action figures, try to stop me. If I wanted to organize guys pictures on cardboard, I am gonna do it. If I wanted to sit down and watch a string of Saturday morning cartoons who is that going to hurt. And if I wanted to eat oatmeal with dinosaur eggs in it. I will.

If you were wondering what that oatmeal, back in the late 90's Quaker created Dinosaur Eggs instant oatmeal to entice kids to eat more oatmeal. I ate it either way but the dinosaurs were definitely a bigger draw in since I loved dino's. When you ripped open the packets of oatmeal and dumped them in the bowl, you would just see dried oatmeal with these colorful pieces in them. But once you added water and microwaved, you were taken back to prehistoric times with candy dinos in your oatmeal. 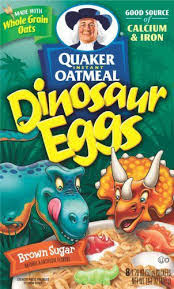 They actually still make this cereal today. There was also a Deep Sea edition that covered underwater friends but I didn't enjoy that as much as dinosaurs. Deep Sea is very rare to find today unlike the dinosaur ones.

Also speaking of Wonder Years, I started to put together the Wonder Years set back in 1999 from the 1999 Upper Deck Retro baseball before I went into my hobby dark age. I will tackle more on this another time.

Do any of you remember how those cards were packaged? They were put into a lunchbox. It was the age of creativity in packaging sport cards to appeal to everyone. My father and I got a call from the gas station owner, which I have said before was our LCS, that he had a hobby box in of the product and that the lunchbox was of Ken Griffey Jr, we drove right down. Another great thing about this "gas station LCS owner" was that he would set the hobby box aside for us and let us pick up a few packs at a time since we didn't have a lot of money. So even though we technically bought the hobby box, it was done in a layaway format so we wouldn't have to front the money up all at once. I was happy when we finally bought the last few packs and was able to take home Griffey Jr lunchbox.

The UD Retro product overall had a throwback feel and appeal to it all around. The insert Wonder Years stood out to me not just because of it's name but the bold colors it represent, but because falling at 1:7 packs I felt I could put the insert set together.

With 24 packs in the hobby box we bought we scored 4 of them.

Sadly after many moves and much interchanging when I moved out of my parents house in 2000, I only was able to locate two of the cards. I wasn't also able to add anymore to the set because the gas station owner was only allowed one of the hobby boxes.

Here were my remaining two I found in my collection today,

Travis Lee. I remember pulling a ton of his cards and chasing his rookies. Never quite ever panned out though. 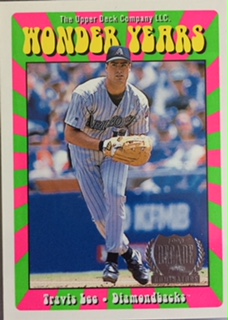 Kerry Wood on the other hand, well, dude could strike you out! 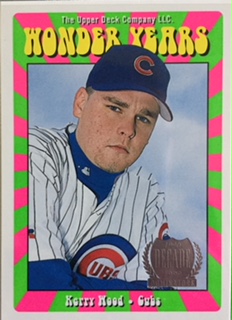 I still may chase down this set but for now, it's not one of the top ones I am seeking. There are many others in my Wonder Years I would like to put together first.

It still amazes me to this day how a simple piece of cardboard or a title from one brings back so many memories. I came across these two cards while sorting and one thing led to another. It made me think about the TV show, the memory of buying the box from the gas station and the oatmeal. I think this is one of the biggest reasons I do collect, I want to always hold onto that nostalgia of my you and my Wonder Years.
at November 13, 2018