2016 Bowman Platinum Baseball makes it return to cardboard in 2016 after being absent in 2015. The shiny reflective cards however take a new twist as you can only find them at Walmart as I did.

I didn't have quite enough money to splurge on a blaster, but I wanted a taste of some Platinum since I have been a fan of anything Platinum since it came into the hobby. So two packs it was....

In each pack of 2016 Bowman Platinum baseball, you will find 12 cards. 5 will be prospects and more than likely an insert will pop in there to. Packs run around $5 which I thought was a good deal.

Let's take a look at pack #1
The base cards have the cool rainbow reflective foil as always catching the eye of this collector immediately. There 100 veterans and rookies to find in the base set. 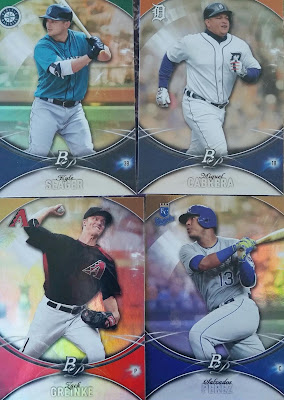 Prospects and rookies have the same design as well. Rookies have the rookie logo of course. The prospects are 111 cards deep and some are Sp's. I think this helps add chase and value to these. 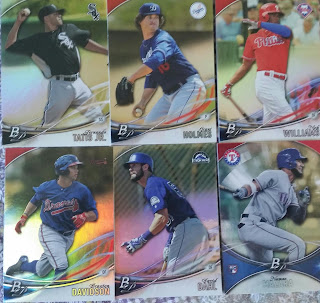 Insert/parallel time!
The Lindor is a Bowman's Next Generation (my only knock on the product is using the same design for the inserts and very small writing to differentiate it. These seem to be one-per-pack finds. The Bryant however, is a green parallel that falls 1:31 packs and is numbered to 99. 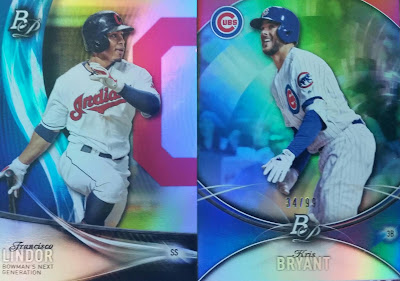 Pack #2 didn't go as well as pack one, I mean how do you beat a Bryant numbered card. Maybe a hit? 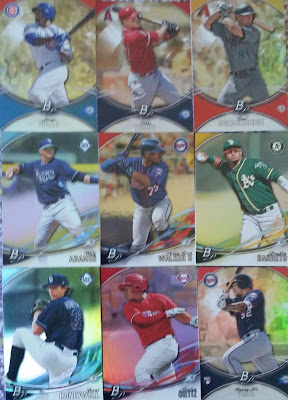 My Bowman's Next Generation find is Osuana while the Rodgers is a purple parallel that falls 1:40 packs 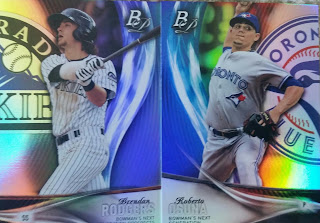 And a tougher pull was my last card in the pack, a Bowman's Next Generation Green parallel /99 that falls 1:101 packs 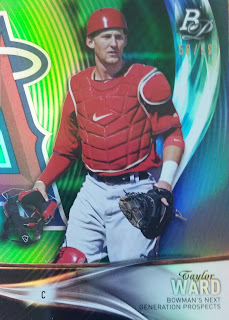 Overall, I think it's a solid buy. I have always felt that way with anything Platinum or Chrome in retail. I always feel my value is returned. Autographs are a bit of a tough pull falling at the lowest rate of 1:105, but not completely out of reach as I have pulled plenty of Platinum retail hits in the past.
Bowman Platinum of course is for certain fans and probably not for all. It's definitely for those who like to prospect even though hits are a bit tougher find. It's still fun however to find the shiny-rainbowy base prospects and rookies in packs at least for this collector who isn't always about the hits.
What are your thoughts on Bowman Platinum this year? You try any? And what do you think of a retail exclusive product?
at September 16, 2016