I don't know if you have noticed or not, but on the right hand side of this blog I have a list of NY Giants players, etc, that I have been wanting to get an autograph of. Ones I have been lacking in my collection. I hope to keep the list updated as they come in or I know of them coming. This list will also be moved soon to a tab when I remodel the blog some.

Over the past few weeks since I have added that list, I have been able to knock some off of it via trades and other deals. None of which is as big as the one I am posting about today. 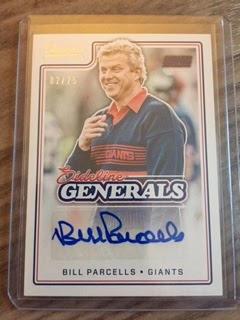 Here is legendary coach Bill Parcells and it's a beaut from Classic. Also numbered 2/25. You know the number 2 the amount of Super Bowls Bill won as head coach of the Gmen. I don't count all of the other teams he coached. Overall in his Head Coaching career Bill was 172-130-1. He was 11-8 in the Post Season including those two Super Bowl trophies. He was UPI NFL Coach Of The Year in 1986 and 1994 and is in the NY Giants Ring Of Honor and also in the NFL Hall Of Fame. How could I not want this card?

One of my stipulations for finding the Parcells card was he had to be in Giants gear and this fit the bill. Get it?

There is much more to go on my list of NY Giants autographs as there are others I will be adding to it soon. At least for now I reeled in the big fish, well, the big tuna.
at January 24, 2019