24 Packs Per Box, 8 Cards Per Pack
In the collecting world when you hear or say the word Contenders, you know other collectors will be listening. So when Panini decided to expand their Contenders line with Draft Picks football and today's break, Draft Picks basketball, collectors should rejoice in excitement at the thought of being able to collect their favorite rookies autographs twice. At least that's the way I see it.

Another way to grab collector's attention is to put the word HUGE HIT in my blog title to help celebrate a big one that I pulled in here. 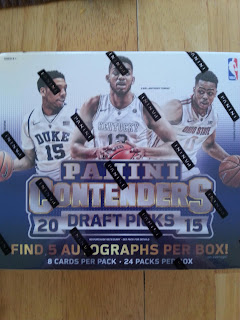 In every box of 2015(-2016) Panini Contenders Draft Picks basketball are 24 packs of 8. Of those 8 cards in a pack, half are inserts. You will also find 5 autographs per box but most likely it will be 6 as Panini has shown with past Contenders releases and my box had that.

Boxes will run you just under $130.
You will also find the following:

The base cards are once again given the ticket treatment. I don't think it would be Contenders if they weren't given that. Being a Draft Picks product, it focuses on the players college years as you will see these players in their throwback uniforms. 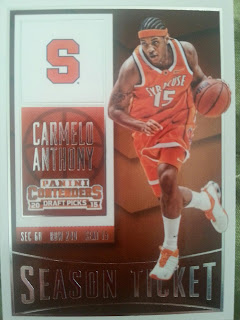 I have never pulled a Cracked Ice so when I didn't find one here, that was no surprise.

The inserts do look nice, but I must admit, I do miss the days of when most Contenders or Donruss products had numbered inserts. Now there just seems to be way too many base inserts. 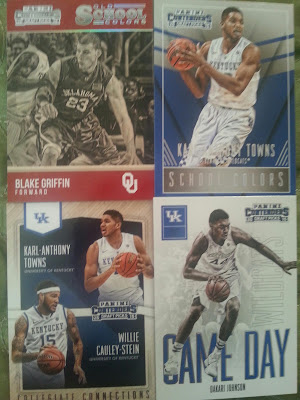 Well, now it's time to get to what you have been really waiting for. The autographs! These are by far what the product is all about.

Thorton is a Celtic drafted 45th overall and Johnson was 48th by the Thunder. 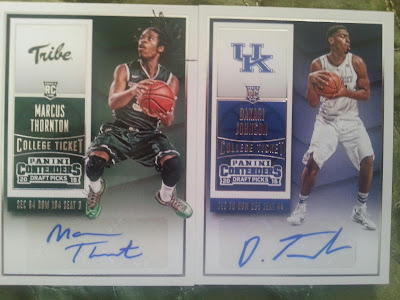 2015 WNBA ROOKIES: Find Autographs of all of the top names from the 2015 WNBA Draft including Naismith semi-finalist Brittany Boyd. I pulled Rehanda Gray in mine who was drafted 23rd by Atlanta. 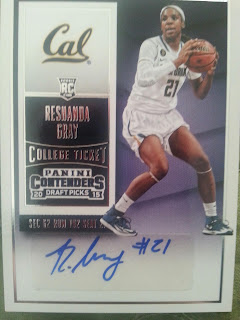 INTERNATIONAL TICKETS: All-new International Ticket has been added to the Contenders lineup! It features 2015 NBA Top-10 Draft Picks Emmanuel Mudiay from the Democratic Republic of Congo and Kristaps Porzingis from Latvia and my player below. Only three in the checklist! Find hobby exclusive playoff, championship and cracked ice tickets, sequentially numbered to 23 or less.

Hezonja plays for the Magic and has a lot of potential. 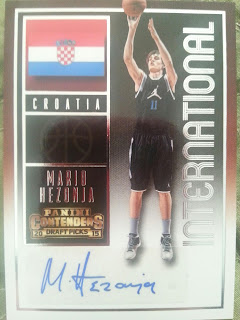 Richardson, was drafted 40th by the Miami Heat. My only ticket parallel from the box numbered to 99. 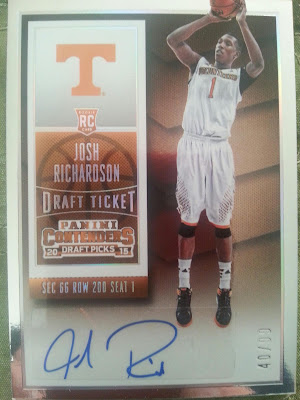 And THE BIG BAD BOY! Playing tremendous this season is JAHLIL OKAFOR. It also appears from early indication that this is a variation as well.

Okafor was drafted 3rd overall by the 76ers. He joins LeBron James and Kevin Durant as the only players to score at least 80 points in their team’s first four games at the age 19 and under and currently leads all rookies in scoring at 20.3 points per game. 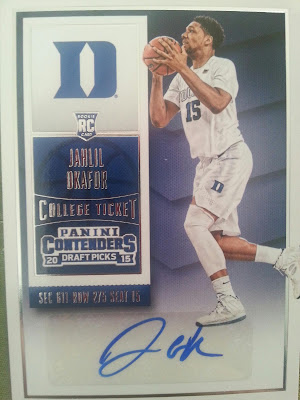 Overall, a tremendous break. The Okafor, I got an WNBA auto, International auto and the rest are second round picks with potential. Seems value is in here. Especially when you are talking rookies as you never know which ones will or will not make it.

I do have a few tweaks I would make too. One, way too many inserts with four per pack. That needs to be dulled down. I think a few more parallels per box and maybe even a different pack layout as 24 packs just seemed like a lot of base/inserts. However, it did help excitement grow for that next auto with every pack I opened.

Comments on this product/break are welcomed!
at November 12, 2015