My buddy Tim over at Cardpocalypse, has created a 7 day Trading Card Challenge which has taken the blogosphere by storm. 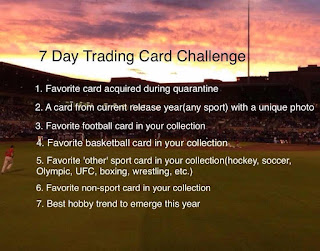 So let's take a look at Day 5 of the challenge.One of my least favorite sports and sports to collect is hockey. Even though someday I would love a Mario, Wayne rookie and autograph of each player. I have so far done really well with trading off a good chunk of my hockey cards but there are some that I won't ever let go of despite not collecting the sport.

Most of those cards come from a Panini product called Classics which was released in 2012-2013. I busted about two boxes of the product and even pulled an Sp autograph somewhere in my collection. I was going to show that one off but can't remember where I put it. 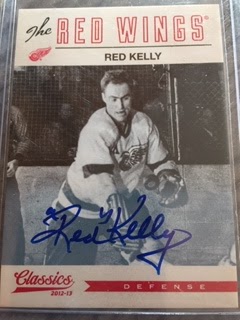 So just for an example, I grabbed one of those cards which was my favorite of the group in this Red Kelly. Great photograph, signature and design of this card. Also, notice the on-card autograph appeal. 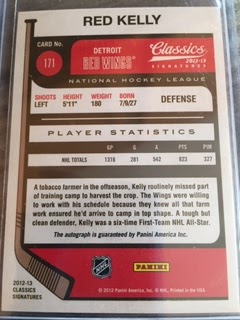 Card back also looks great including player stats and a small write up.

That does it for Day 5. Only two days left including a non sport one I suggest you come back for tomorrow.
at June 22, 2020