Autograph number one is of Linebacker Peter Boulware of the Baltimore Ravens. This was a guy I watched play in the late 90's as my love of football and football card collecting evolved even more. He also happened to also be a guy I pulled a lot of cards from in that era as well. I thought adding his auto would be a cool addition to my collection to remind me of those years of 90's collecting. I also like his signature as well. 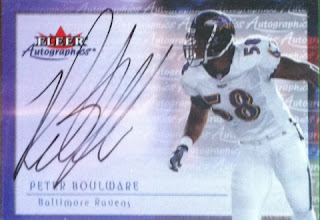 Autograph number two is simply because it's a unique 90's piece. A signed phone card. You can't tell me that's not cool right? It's just too bad the featured player didn't fully play up to his hype. But either way, cool card I think. 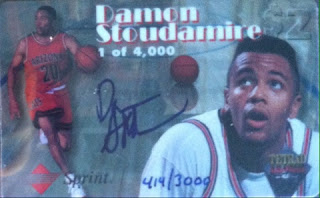 Overall, a great mail day but I will say, I didn't show you all of it. I held out all of the sweet 90's packs I received as well. Those will be at a later time for some Breakin Wax segments and I can tell you ahead of time that I pulled a few decent cards :)

Thanks again to Jammin JDcards for safely shipping my cards and for speedy delivery. If you haven't yet, go check em out and see what they may have for your PC!
at July 07, 2015