The Beckett Files:Price Guides Are Still A Thing (to me)

It's amazing the change in determining value in today's collecting as opposed to collecting when I entered.

Back in the 90's, Beckett was very relevant as a price guide. If you needed a price or value on a card, most likely you would hear the response, "I need to look it up in my Beckett." I remember plenty of card shows where the dealer would get out their specific Beckett and check the half book value before they sold me the card for that price.

Today, the thing you will hear most about Beckett is their grading services and people using eBay for card values. There are very few of us who use a Beckett for values anymore from what I have observed and heard. Me, I still use it. Not that I plan on selling, it's just fun to see a value put on your cards and keeps you wanting to beat your last highest value. I was raised and born into the hobby using a Beckett for values and as long as there are Beckett's, I don't plan on changing.

Being a collector of multiple sports, its sometimes challenging to keep up with looking up values.  I at one time had subscribed to multiple Beckett magazines to cover all of my areas. But, when Beckett switched from individual monthly sports to the Beckett Sport Card Monthly, they dropped the other sports to 4 times a year (they have since switched them back to monthly), I decided to stick with the monthly one that covered all of my sports. The problem I have now is that they don't list everything I need as you can only fit so much into a monthly magazine.
Luckily I found a way to fix this problem, I buy one Baseball, Football, Basketball and Hockey card issue once a year. Cause honestly, who can afford to subscribe to them all. Prices have also gone up for them since the 90's as well.
I am just glad that there isn't much expansion in some sports as I don't have to buy individual ones for wrestling, UFC, Golf, NASCAR and 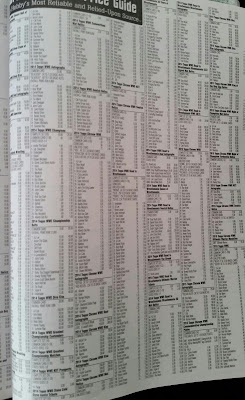 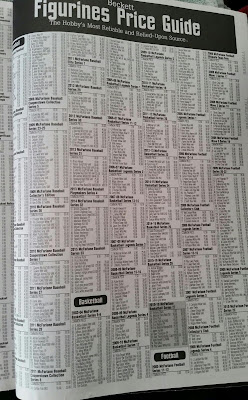 I know some of you may ask why I just don't get an online subscription, well, that's a simple answer. One, it costs a lot more and doesn't fall into my finances. Two, I have stated how old fashion I am many times and how I like "physical" objects and I would rather flip through the pages instead of scroll on a computer.
It may be fun for me to see the Beckett values in hand, but when I tried to use those in a trade once I learned a valuable lesson. I learned that most collectors won't use book value anymore to judge a cards trade value. That is something that doesn't settle very well with me. If I see a card worth $100 in Beckett, I expect to trade for the same value.It does not work like that anymore and it's been a tough transaction but one that I will have to deal with.
I am not sure when the transaction from everyone using a Beckett to not using one for card value changed, but I guess it just shows the hobby continues to evolve and move forward. Are all changes like this one a good thing? Hard to tell. I still wished this one remained that way everyone can be on the same page with card values, yes pun intended, cause I think that sometimes leads to issues I have seen on many social media sites when people trade/sell/buy. At least I will always have a roundabout number.
Today's article is one in a series of ones called The Beckett Files. I sat down one night and tore threw a Beckett comparing today's Beckett to the ones I grew up with. There are definitely some ups and downs and you will see them all as I post these up.
at March 03, 2016