The Week In Pictures: Another Victory 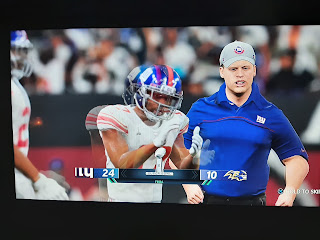 This week in pictures is brought to you by the letter W. As in, Winning.
I know there probably isn't a lot of gamers who read this blog or ones that focus primarily on one sports game like I do but I will do this post regardless.
Madden once again is the only game I buy every year and is the only game I play. I actually make sure I get it right on release day. So a few times a week instead of card collecting, I strategize, sign and trade players, and come up with a game plan to play against the computer. I don't do online gaming. I usually take the Giants in Franchise Mode, tear apart the roster, build up from the ground up and make a run in a season or two.
I recently rebuilt a team and just finished Season 3 with my second Super Bowl Victory in three seasons. The second season I went to the Super Bowl, I just didn't win it. I don't usually have great starts to my Franchises like this but figured out a thing or two and it has led to success. 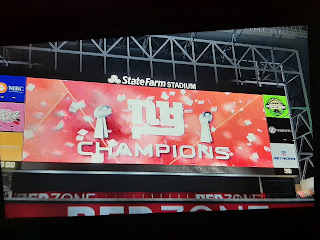 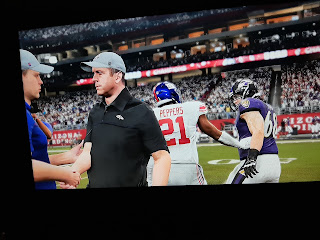 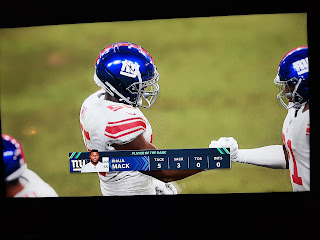 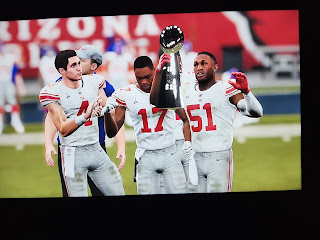 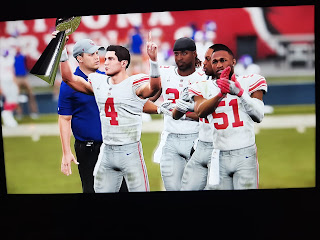 The celebration goes on. The QB that led my team was a rookie QB I drafted and who played only 11 games with 2,768 yards passing, 26 TD's and 8 int.
However building the team the way I did, I put myself into cap tragedy for Season 4. I was -73 mil so had to tear down the roster completely and rebuild over again.
So far I am 2-0 to start the new season with a completely new roster but its not the greatest one so I don't expect to take this team too far.
Any of you play Madden? Any other games? Let me know in comments!
at February 06, 2021