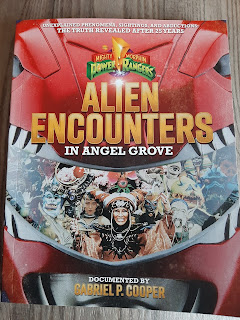 I don't do a lot of reading now-a-days but when I do it has to be something that is a complete draw-in for me such as other blogs and something that has a connection to my childhood.
I think Jon from A Penny Sleeve For Your Thoughts must have known this secret when he mailed me a really amazing book just after Christmas.
The book, Alien Encounters In Angel Grove, captures all of the Mighty Morphin Power Rangers monsters they battled through the seasons I watched. They are also all in order of when they appeared which is also really cool. 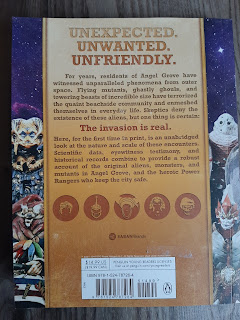 Here is the back cover of the book.
On the inside as I said it captures all of the monsters and alien villains the heroes had to battle over time. 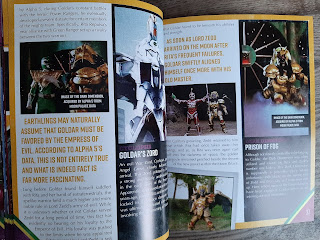 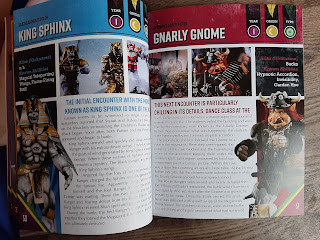 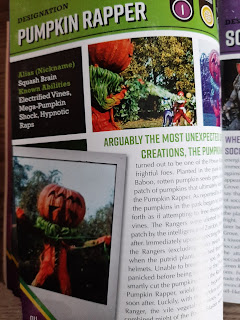 Each page breaks them down with their name, which person created them and what their known abilities are. Pumpkin Rapper was one of my favorites. 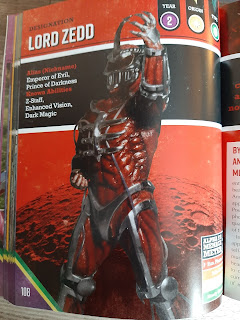 But not as much as Lord Zedd. That dude rocked and was the most iconic alien monster on the series in my opinion. I still need to get his base figure and not just the light up one I have. 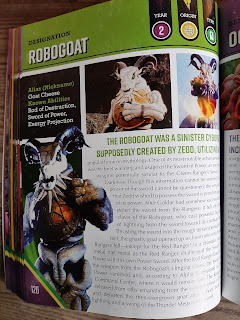 This was one of his first monsters he created when he stepped in for Rita who wasn't having any luck in trying to defeat the Power Rangers. 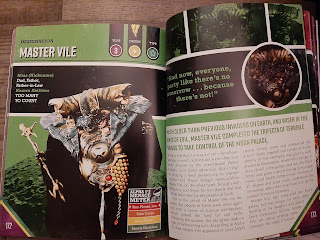 And speaking of Zedd and Rita, how about Rita's father Master Vile who stepped in when Zedd and Rita couldn't conquer Earth. Must have been fun working alongside him....not.
Another thing I haven't mentioned yet is that I have been re-watching the entire Mighty Morphin Power Rangers series on Netflix when my internet allows me to. I am on about episode 20 or so with many more to go. If my internet was only better I may be a lot further.
Thanks to Jon for the surprise mail day. I hope to hit you back at some point as you are on my list. I have really enjoyed the book and being able to match it up to what I am watching.
If any of you readers watched MMPR, who was your favorite Ranger or Alien monster?
at February 08, 2021

Email ThisBlogThis!Share to TwitterShare to FacebookShare to Pinterest
Labels: 2020, 2021, A Penny Sleeve for your Thoughts, Mighty Morphin Power Rangers