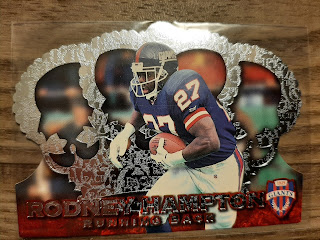 The second year of the crown die cut fun brought forth another round of fun die cuts, inserts and parallels.
There isn't many Crown Royale cards I need of Rodney, but the ones that I do are the parallels.
This past Christmas I was...to say the least, bombarded by a man called Wes.
Surprises became surprises with surprises within surprises. Try saying that five times fast.
In the surprises were some long sought after Rodney Hampton cards I needed including today's 1996 Crown Royale Silver.
These silvers, were randomly inserted in retail packs only at a rate of four in 25. The only difference from this than the base is the obvious silver foil instead of the gold. 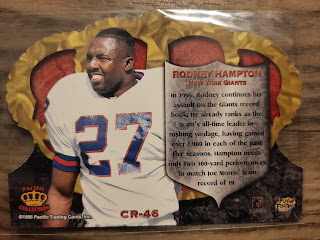 Back of the card remains the same.
Thanks to Wes for the Rodney help. There will be a few more that Wes sent along coming up in future Rodney's Cardboard so stay tuned.
at February 28, 2021