When I went to the Daycare to go toy hunting, I had no idea what I would uncover that day or if anything would have any significance to me.
My first post had a Robocop toy that didn't play a big role in my childhood, but today's did and it wasn't the only one.
In 1993, I watched one of my top 5 favorite kids shows of all-time, the Mighty Morphin Power Rangers!
A quick recap of the show is a series that took place in fictional Angel Grove where five teenagers with attitude were chosen by Alpha 5 from the orders of the wise Zordon to protect the earth from Rita Repulsa. Rita was once locked away by Zordon in a extraterrestrial container but after 10,000 years of being imprisoned for her evil deeds, two unknowingly astronauts opened the container and set her free. Her mission was to conquer earth! So Zordon needed help to protect it and get Rita imprisoned again. Hence, the five teenagers who were giving morphin powers to do so. They had many weapons at their disposal along with big robotic machines called zords to fend off any of Rita's big plans with her evil aliens she sent to earth to destroy it.
Jason was the red ranger and was given the Dinozord Power Coin of the Tyrannosaurus which was his zord as well. 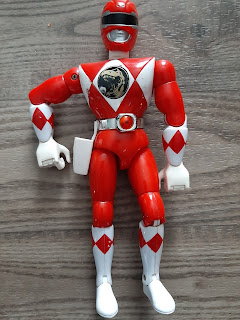 This toy is only missing his weapons. 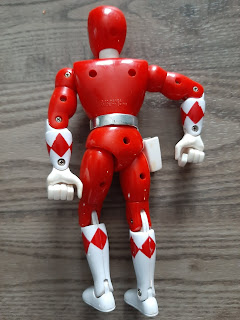 And has very little marks on it which is surprising for a toy almost 30 years old.
Now I am aging myself.
I never owned any of the original toys that released as my first figures were from the fliphead series.
I paid less than a $1 for this with most selling for $10-$12 so I did pretty well with this one and the fact it's going into my toy PC.
There is still so much more to show off in this series so stay tuned!
at February 11, 2021