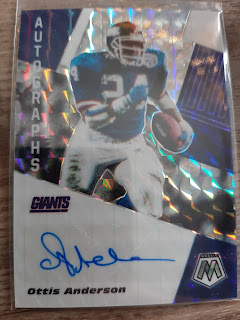 A lot of my NY Giants knowledge beyond 1995 is very blurry and iffy at best. It's something I need to work harder on and study more to extend my knowledge of my favorite team.
Another thing I need to work harder on is adding cards of Giants from the past and not so many of the present. Needs to have a better balance.
So when I was checking out Burbank Sportscards, I came across a couple autographs of Giants legends that I didn't get to watch myself but got to see highlights of and knew I needed autographs of.
Ottis Anderson was a 2X Super Bowl champion, Super Bowl MVP, Rookie Of The Year in 1979 and a comeback player of the year. In a long line of Giants legendary running backs he doesn't get mentioned as much as he should for playing like he did.
The next guy up was a beast at the Tight End spot. 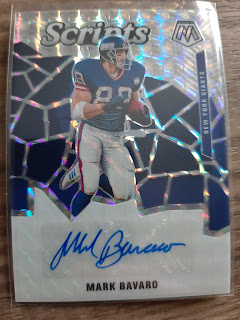 Not only does Mark Bavaro have an excellent signature, but he was also a 2X Super Bowl Champion, 2X Pro Bowl tight end (an actual one and not one like Evan Engram) and a 2X All-Pro. He also has a spot in the NY Giants Ring Of Honor.
Up next was a guy who helped show the Way for Rodney Hampton 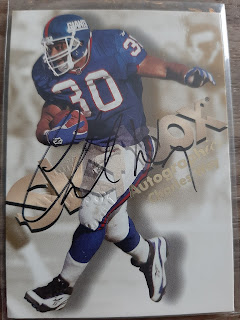 Charles Way was a full back for the Giants from 1995-1999. I had always wanted his autograph card and remember specifically seeing one at a card show in 1997 that I desperately wanted and couldn't afford. Fast forward to now, that card is now in my possession for less than $3.
And there was no Way I was done with adding another cool Charles Way card. 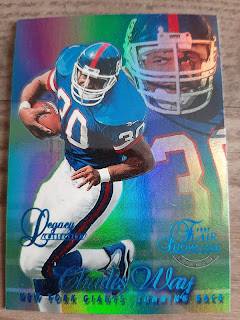 1997 Flair Showcase Legacy parallels were randomly inserted in packs but were not easy to find or pull. I never once pack pulled one and only own now two in my entire collection. 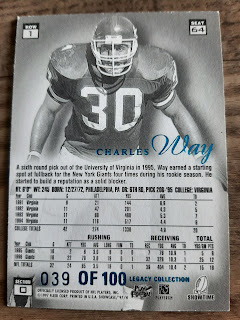 These parallels were /100.
Adding those two Charles Way cards had me itching to maybe add more of his cards as well. He helped Rodney a lot of yards so you could possibly call it a sub PC of Rodney's. Stay tuned for that.
Some nice affordable adds from from Burbank Sportscards Beckett Marketplace (also saved 10% by using code 15Burbank which I suggest you use) that I look forward to shopping more on there to add more to these collections.
at February 10, 2021