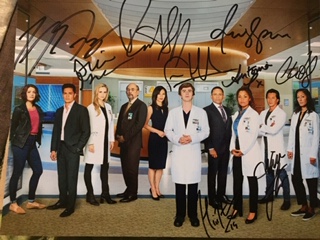 I have been apart of a Autograph Group on Facebook for most of the summer now as I am not one to usually join groups. Outside of this one, I am in one sport card one and a Disney Afternoon Cartoon one. Facebook in general to me is boring.

But, this autograph group is a place where individuals share their autograph successes especially using TTM. I have enjoyed seeing others successes so thought I would try one of the addresses they gave that caught my eye.

A TV show about a guy with Autism with spectacular talents in the medical field. I felt connected to the show knowing some kids with Autism so I gave it a watch. Really great show that gives you an insight on Autism and how it effects those with it while at the same time shows you that just because you have Autism doesn't mean you can't make a meaningful life out of it and an impact on others.

The person who shared the address shared his success from it landing an autograph photo from Freddie Highmore who plays The Good Doctor. So I expected the same when I submitted mine. But instead, I was shocked to had landed the entire cast!

Then I was curious if it was a print so I asked the guy in the group about that and he said it's 100% authentic as he compares mine to others and they are all different in the way they were signed.

Excellent score now if you ask me!

Thanks to The Good Doctor for sending this to a big fan and for the cast taking their time out to sign the photo.
at October 25, 2019