Pillars Of The Game

Bloggers Note: this post was typed up back in September so I am just getting it published now. Who knows how far or how far not the Giants or players featured in this post have come

The NY Giants season is still young, but it appears this young team may have a bright future. How far down that road is the bright future? I don't know. I just know the pieces appear to be in place for it.

In the meantime, I will collect the future before it hits full power. 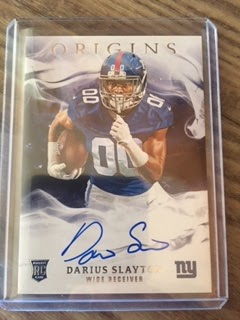 Darius Slayton has shown signs of life and for some reason for me has shown that maybe I should start a PC of him. Of course I always worry about PCing newer players not knowing how long they will be on the team or in the league for. Hence Rueben Randle and Andre Williams.

Thanks to my friend @JGfan24ever for grabbing this beaut (besides the 00 jersey) for me from @ACFCARDS1. 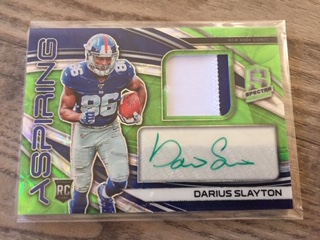 Here is my best Slayton to date, a green ink, green parallel /50 I recently got in a trade with @card_a_holic who busted a box of 2019 Spectra for his birthday which I think was a box intended for me as three of the hits were for me. And they literally were thanks to this trade. 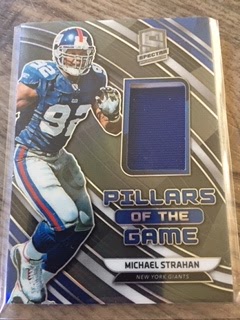 This was another one of those hits, Michael Strahan Pillars Of The Game. 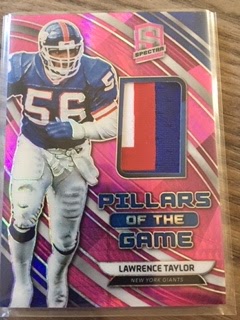 And the final hit I fell absolutely head over heels for. /15 Pink Pillars Of The Game Lawrence Taylor. The only sad part about this card is the fact it's a player worn jersey. Really? Really? Player worn? I don't know why we don't have more Game Worn jerseys in this hobby.

Rookies I somewhat understand as they hadn't hit the field yet, but maybe at least get their preseason game worn ones. But Legends of the game such as LT should be Game Worn.

A big thanks goes out to @card_a_holic for another successful trade. I look forward to our next!
at October 15, 2019