The Origins Of A Cardboard Addict: Heroes In A Half Shell

Long before I started collecting cards, I was a TV geek.

I watched a multitude of shows from the time I got up in the morning such as Rush Limbaugh (can't even explain why a 6 year old was watching him in the morning but he did) followed by Duck Tales before I was off to school. When I got home from school, the TV came on so I could watch Extreme Ghostbusters (wasn't nearly as good as The Real Ghostbusters), and the Disney afternoon block. Then on the weekends, especially Saturday Mornings, don't even talk to me. It was all taken up.

I should also point out before I continue on that I wasn't always watching TV. I spent at least 85% of my childhood outside. I loved being outside and most of the time played pretend as some of the characters from my shows. As I got older, that turned into being my sports heroes but as a child it was reenactment of my favorite shows and characters.

One of my favorites to watch, act out and play with figures of was the Teenage Mutant Ninja Turtles.

I was really into mutants at the time from all of the shows I watched and none were greater than from TMNT.

I loved the two TMNT movies especially the second one with Super Shredder, I like to forget about the third one that didn't interest me at all with it's lame time traveling storylinel. I also enjoyed the TMNT video game for the NES that I used to play at my friend Brian's house as my parents didn't have money to get me a system. I also enjoyed the TMNT cereal, Chef Boyardee pasta shaped turtles, and those Hostess Ninja Turtle pudding pies. They don't make cool food anymore.

But, there was nothing I loved more than the cartoon series that was totally radder than anything else. Cowabunga's all around folks. That's better than high fives.

The cartoon series started in 1987 and lasted until 1996. TMNT was created by Kevin Eastman and Peter Laird who started a comic series in 1984 that boomed out to so much more. They didn't expect such success but what they created was brilliant and loved by all.

One thing I have been trying to do in 2018 was chase down some pieces of my favorite things growing up. I have added a few The Real Ghostbusters figures, signatures from some comedies I watched, and I added a couple TMNT figures recently as well.

Thanks to my buddy Autograph Blog, I also found out that one of the co-creators of TMNT had a TTM address. So I was all over that. In just over a month, Mr. Peter Laird sent me back two great pieces.

Sketched out a couple of turtles and signed both pieces. So cool! 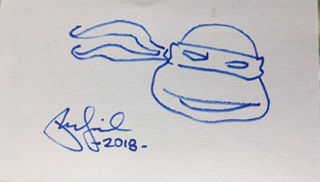 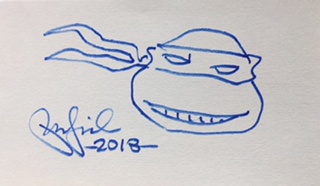 I also found out that Mr. Laird has a TMNT blog but it doesn't appear he uses it anymore as it had one post in 2018 and that was the first one in two years. I would have followed it for sure if it had more use.

Peter, if you are reading this, thanks man for the piece of childhood history I will treasure forever.

As for the new series of TMNT if you are wondering my thoughts, well, they are terrible. They took the whole heart out of what the Ninja Turtles used to be about and made them goofy. I also wasn't a huge fan of the movie remakes either as animation doesn't even touch what Jim Henson did for the originals. Once again it teaches us the lesson of don't mess with the originals. This goes for everything people. Hollywood, come up with some new ideas or sequels at least for the things you are considering remaking.

Before I close out another riveting The Origins Of A Cardboard Addict, I wanted to mention who my favorite turtle is, it's Leo who I think Peter drew for me above since I mentioned to him my favorite turtle. I always was Leo with my friends when we role played. I am not sure if it was because he was the leader of the group or I just liked blue or his choice of weapons, but whatever it was, Leo was the man. I still need to chase myself down a Leo figure from the 90's.

So let's hear who your favorite turtle was or is and any other thoughts on TMNT in comments.
at December 01, 2018

Email ThisBlogThis!Share to TwitterShare to FacebookShare to Pinterest
Labels: 2018, Peter Laird, The Origins Of A Cardboard Addict, TMNT, TTM