What's In The Mail Box?

As you have seen in past posts, I am a huge fan of Rueben Randle One, because he plays for the NYG and two he is about ready to have one huge breakout season. So I have begun a small but growing PC of him.

Last season was just the beginning I think for Rueben as he showed his incredible hands in some of the games and made strides in his route running and connection with Eli Manning. If this says anything, he went from 19 receptions for 298 yds and 3 TD's in 2012 to 41 receptions for 611 yds and 6 TD's in 2013. Double his production from his 2012 rookie campaign.

I found this card at a decent buy-it-now price and scooped it up. I also like the design as well: 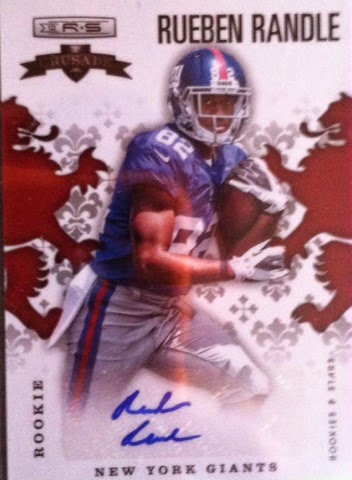 I was pretty stoked to have added this card to the PC mix! Most of my Randle autos are Panini ones.
As always, let me know your thoughts on my mail day!
at June 07, 2014