Friday was a pretty good day for me. I woke up to some pretty cool news I will touch on in a second and got a couple of cards in the mail.

First card I received was a PWE from Hoarding Cardboard blog. It was the one card I won during his Season Of Giving. But, it's a nice card I really wanted so I am very happy about it. Thanks Jason! 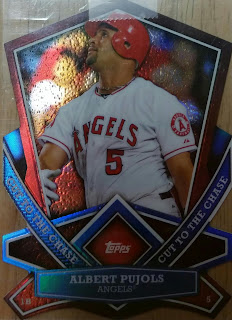 Second card was a #RAK I got. I knew a card was coming, just didn't know what card or who bought one for me. Finally, that mystery was revealed yesterday. 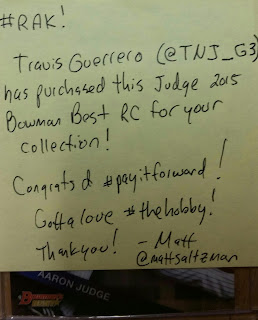 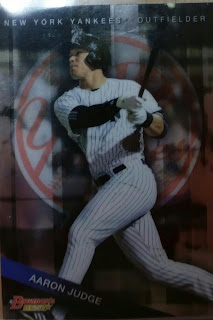 A big thanks goes out to @TNJ_G3 for picking up this new Judge for my PC.  I really appreciate your generosity. Thanks to @mattsaltzman for mailing it to me.
And finally, some big time winning news.
If you haven't heard, GoGTSLive and Beckett's #TheFatPacks podcast joined forces to do a 2017 Trading Card Awards show covering everything from Best Memorabilia Product to Best Prospecting Product to Best Collector Blog. I knew I was in the running to win this, but with the already award winning Night Owl Cards and the very popular Dub Mentality and Cheap Wax Wednesday (Project Pedro) blogs on the ballot, I knew I was definitely a big underdog. Especially to Dub Mentality blog that has a good Twitter following and that's where they spread most of the links to vote with. (I also watched the show the next day and all commenters were voting for him to win and one said after the announcement of the winner that he was robbed)
I sadly wasn't there for the live showing of this Thursday Night because I have been dealing with a nasty head cold this week and went to bed early. I woke up the next day to a surprise that I had actually won receiving 40.89% of the votes. 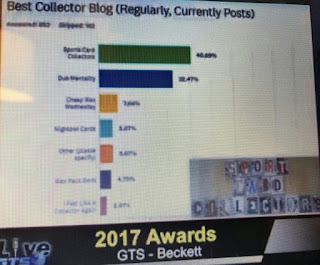 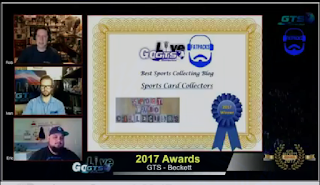 After almost 6 years of blogging, this is probably my biggest accomplishment. Every time I have been in the running for any of these type of "Blog Of The Year" contests, I have lost and finished second. This time I was the NY Giants in the 2007 playoffs beating some great teams onto a Super Bowl win. I know an award like this may not mean much to some. But, to me, this little screen shot award means a lot. It's a reminder of how my hard work paid off. It's my Super Bowl trophy I will always have even if it happens to only be once.
Thanks to everyone who voted for me and just to have been in the running alone with the names on the ballot was impressive in itself. Congrats to those that were also in the running and I am glad to be apart of such a tight brotherhood of bloggers community. This community is like no other.
To end today's post, today has started off with a win as well. I woke up to the blog reaching another new milestone as I surpassed 900,000 total views. Onto a million next!
2018 I am planning on a better year of blogging with new creative ideas and not just mail day  Hopefully next year I can take home that title again.
at December 30, 2017