Inserted 1:24 hobby and retail packs in 1996 Stadium Club series 1 were Sunday Night Redemption cards.  Each card featured two numbers that were to be compared to the final scores of each week's NFL Sunday Night football game.

The Giants Week 1 NFL game gave them the matching score and my guy Rodney was apart of that weeks cards.  I was worried I wouldn't be able to chase one of them down as they seem to be extremely rare finds. Luckily I was able to and as a surprise my wife picked it up for me.

Always glad to knock a tough card off my want list. 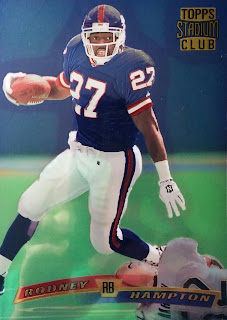 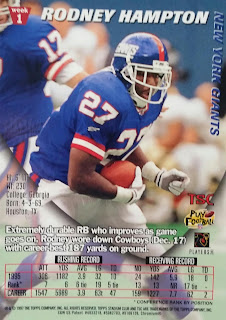 The card itself is the same card as the 1996 base one except it's chromed, jumbo and the card number is Week 1.

I hope to keep knocking Hampton's off my list and if you would like to join my hunt, my want list is HERE and trade em to me or send me a nice gift. Either way it will make my day especially after watching this Giants team this year.
at December 18, 2017