From time to time, Gavin over at Baseball Card Breakdown fame and I do mail day exchanges just for fun. There isn't any set-in-stone trade this for that, it's simply just mailing. Sometimes the simplicity of things is the best way. Sometimes trades can get way too complicated especially when it comes to high end cards or things of value where you have to base it on money and not fun. Because honestly, nobody wants to lose money even as much as you may like your trading partner.

Up first, some Eli and someone had he played against Eli would have definitely taken him down. Especially with this years oline.

More Eli. Really dig Prizm. I know a lot of people complain, but while we wait for Topps Chrome to make an NFL impact again, Prizm is the best shot now. 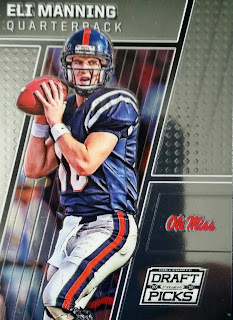 Shiny Eli! I also wished Upper Deck would have a shot an the NFL again. 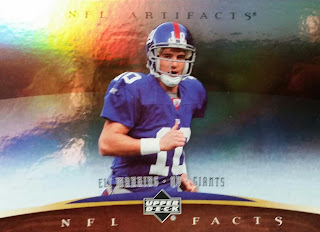 Two of my bigger Giants PC's have been Andre Williams and Rueben Randle. Two players I expected a lot out of and turned out to be big time busts. Williams now is on the Chargers practice squad while Randle bounced a couple teams to the Bears where he was put on IR. My one-time investment of my teams players went down the drain. But, I will still collect them only in a NY uni however. 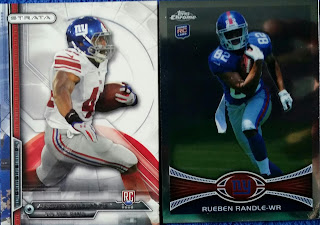 And even though he is no longer apart of the team, he was in the trade to the A's for Sonny Gray, I really dug this card and claimed it when Gavin stuck it up for grabs. Fowler is someone who hasn't quite made a name for himself yet. Maybe next year. 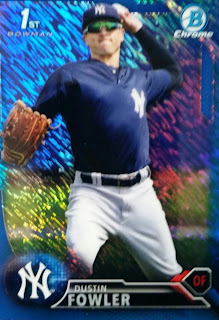 Thanks again Gavin for being such a great trade partner and I recommend anyone who hasn't traded with him yet to do so. I look forward to our next trade which I know is right around the corner.
at December 03, 2017