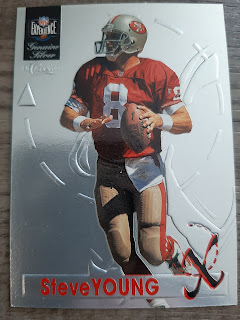 Growing up in the 80's and 90's I got to witness some of the greatest players to ever play their respected sports and then some.
I have a list of some of those players I collect from those eras and with my latest mail day showing in Christmas from the great Wes, he covered a multitude of them.
Today, I kick off showcasing some of my favorite cards from that mail day of those players.
Steve Young, you kick us off.
For 15 years, the left handed Young did what he did best and that was complete passes. He led the NFL 6 of his 15 years in the league in completion percentage and yards per attempt. Not only could he throw though, but he was a threat on the ground as well rushing for 4,000 plus yards in his career. Young is also a Hall Of Famer, a Super Bowl winner and MVP and a two-time League MVP. Did I mention he threw for 6 TD's in that Super Bowl win? Yeah, he was a legend.
I am not sure what part of Steve's game I enjoyed more, his passing abilities or his abilities to use his legs to score but it was always fun to watch him play. Except when he played my Giants, those were sad times.
Wes sent along a nice sized stack of Steve Young cards but these are the ones that stood out for me. 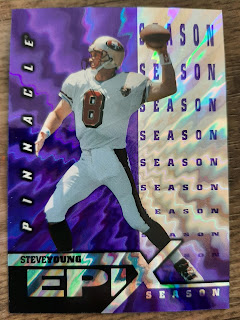 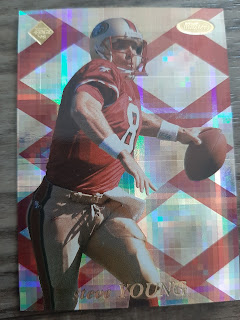 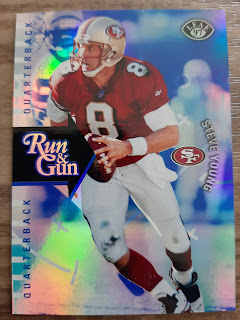 Run and Gun, these were double player sided but I only showcased the one player that mattered in this post. 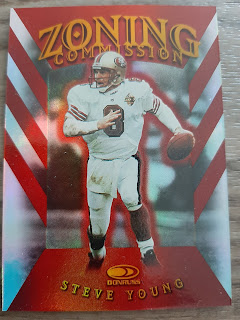 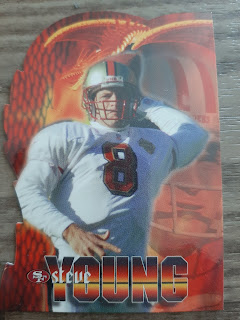 (couldn't locate the name on this insert) 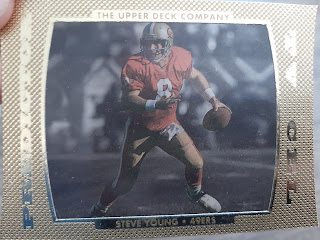 Predictor TV Cel
I didn't put these cards in any particular order, but my Top 2 favorites have to be the Epix and the TV Cel.
One of the best highlights of Steve Young was his 49-yard game-winning touchdown vs. Vikings in October 30, 1988. If you haven't seen it yet, go ahead and do it.
at April 05, 2021